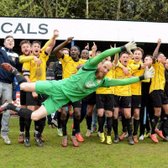 Things have changed a lot since 1879 and even since 2011. At the end of 2010 the then Assistant Manager Neil Tooth asked if the Club could use it's Rotary connections to find somewhere they could train throughout the season. The Board undertook a survey and it was agreed with funding from within the Club to spend £400,000 on a 3G artificial pitch as the main stadium pitch. At that time ( and it still is ) this was a massive project for a Club at that level. The ground was levelled and a very efficient drainage system installed before the 3G carpet was placed on top. All of this was done in record time from early May when the season ended and work commenced, to mid July when it was completed, in time for pre season friendlies.
The 3G pitch has completely changed the fortunes of the Club. On the playing side, no matches are ever postponed due to bad weather ( 2 were postponed in the first season due to heavy snow ) and the level pitch ensures good passing football can be played ( by both sides ).
On the commercial side, the pitch is hired out to other teams for matches and many teams and other organisations use it for training, 6 a side matches and tournaments. The income generated is used to maintain the pitch ( including money put aside for a fund to replace the pitch after 10 years approximately ), staff the operation and put money into the Club to financially support the 1st team budget. In the 2014-5 season the 1000th 11 a side match was played on it.
Chris Keogh stood down as manager at the start of the 2012-3 season and Assistant Manager Neil Tooth took over as 1st team manager.
In that season the Club again famously missed out on a play off place on goal difference in injury time of the last game of the season when leading against Leek a penalty was conceded and the match drawn.
However, the Club finally achieved, what many thought they never would, and after leading the Evostick Northern Premier Division 1 South for most of the season, fell away just after Christmas 2014 but rallied and finally made the play offs in 4th place. Two superb performances, away at Newcastle Town in the semi finals and away at Leek in the final ( in front of a crowd of 1200 ), when the Royals won 2-0, meant that the Club took their place in the NPL Premier division for the 2015-6 season.
Again many doubters said they should not have been promoted and would certainly immediately be relegated, but they ended their first season at step 3 in a comfortable 12th position.
In addition, the Cup hoodoo over the last 20 years was finally broken in this season when several good victories eventually led to an appearance in the 1st round proper of the FA Trophy at home to Conference Premier side Barrow. With a late breakaway goal from Barrow, after a good penalty shout for the Royals, they lost 1-0.
Also during this landmark period the Club has acquired their own brass band, choir and avid supporters group called the Ultras. They are the envy of most teams the Royals play and certainly add to the match atmosphere. In the bad floods of 2015/6 some of them made the long trip to Ramsbottom United in Lancashire who play in the NPL Premier alongside the Royals, to help clean up their football ground after extensive flooding. This caused quite a stir in the non league football world and led to more justified publicity for them and the Club.
Season 2016-17 proved to be a relegation fight all season and in November 2016 manager Neil Tooth was replaced by former Dutch player and WBA stalwart Richard Sneekes and his assistant Steve Hinks. Relegation was averted on the very last day of the season with a fighting 0-0 draw at Workington.
During early 2017 there was heavy investment at the ground with new toilets in the Clubhouse, new 100 seater stand adjacent to the Clubhouse and a new triple turnstile block. During the close season prior to the 2017-18 season the 3G pitch was lifted, a new base of tarmac installed and then relaid to ensure a perfect playing surface for many years to come.
The 2017 – 2018 season mirrored that of the previous year; again, Sutton struggled to pick up league points and were knocked out of the FA Cup and Trophy in the early rounds by lower league teams. At the beginning of 2018 with the team having only 5 wins and 5 draws from 29 games and a goal difference of minus 48 the decision was once again taken to change the management. Neil Tooth (Toothy) was reappointed with a new management team and reinvigorated the team doubling the number of wins and being competitive in almost all the remaining games. However, the deficit inherited was too great and relegation became something of a formality.
All in all a lot has happened since 1879!