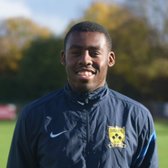 Neil Tooth last night released Malachi Farquharson and said that there will be more ins and outs over the next few weeks.

"It has not worked out with Malachi" said Tooth, "He is a really nice lad and he is honest too and he agreed with that he has not performed to the standard he is capable of and im not one for keeping players for the sake of it so I felt it was best for all concerned and especially Malachi that he goes and gets some regular football from now until the end of the season."

Asked about anymore movements Toothy said, "We have 7 days in on a player and we also had a very good lad train with us last night with a view to signing so im hopeful they will happen. Going out we shall see but some lads put themselves under pressure with the performance levels at Marine on Saturday and if I feel over the next few weeks they are not improving them yes there will be some more going out."