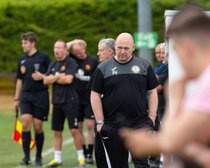 A disappointing result away to Long Melford on Saturday, the Pedlars still missing some of the squad through injury and family commitments. A fine performance from keeper Tommy Rix, denying Melford in the tenth minute, diving to his right and diverting the ball onto the post, Little other goalmouth action at either end throughout the first half until seconds to go, Melford opening their account to go into the half time break with the advantage.
The Pedlars playing the better looking football but lacking that final touch or pass to threaten. A further great stop from Rix in a one on one keeping the second half interesting, the Pedlars unable to test the keeper at the other end. Melford hit the net again in the seventy fourth minute and finally got their third on the counter in added time. On a positive for Swaffham, some good performances from a young side and second half substitutions giving Manager Paul Hunt the opportunity to blood two Under 18's in their First Team debuts.
A busy week ahead in the Thurlow Nunn Premier Division, Tuesday away to the Yachtsmen of Wroxham and then next Saturday Gorleston visit Shoemakers Lane.
Better fortune for the Reserves in the First Round of the Cyril Ballyn Cup with a three one victory away to Long Stratton Reserves. Goals from Kieran Bruce, Callum McDermid and Sary Rahma progressing the Pedlars to the next round. Further Cup action next weekend for the Reserves, this time in the Norfolk Junior Cup First Round. Swaffham are away to East Harling Reserves.
A well matched game last Monday with the Under 18's away to Cambridge City in the FA Youth Cup. A fantastic game for the neutral, Cambridge bagging the only goal of the match in the sixty second minute. This week the Young Pedlars travel to Aldiss Park for a local derby. The visit to Dereham usually provides great entertainment.
Share via
FacebookTwitter
https://www.pitchero.com/clubs
Recent news