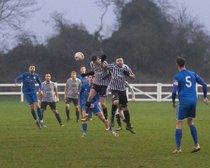 A Point for the Pedlars

A much improved performance from the young Pedlar squad as they rebuild for this season. The ever changing weather conditions this week had the fixture in doubt on Friday due to a frozen pitch, but the Saturday morning pitch inspection kept the game on, only to then have the fog coming down and lifting throughout the afternoon. Swaffham defended strongly against the visiting 'Royals' with several opportunities foiled, the closest coming from Tom Jewell in the seventieth minute, a Matthew Blackford cross headed onto the bar from seven yards. A sound outing for keeper Charlie Phillips, commanding his area with authority, the clean sheet a credit to his efforts. No game for the Pedlar senior team next weekend.
The Reserves were on the road to Caister Reserves, Nathan Lawes with the only Swaffham goal in their five one defeat. Saturday they host Beccles Caxton at the MG Building Maintenance Stadium, kick off 2.30 pm.
The 'A' Team were unlucky to drop their points in the final minutes of their meeting with Eaton Wanderers in a thrilling seven goal encounter. Goals from Justin Powley, Ashley Choppen and Jordan Lown not enough to tip the balance. Choppen and Lown providing the assists. Next weekend they too are at home in League action, Hornets the visitors to Shoemakers Lane.
Next Sunday the 'senior' Pedlars are in County Cup action, Bradenham Wanderers Veterans visit the 'Lane' in the second round of the 'One Broker' Veterans Cup, kick off 1.30pm.