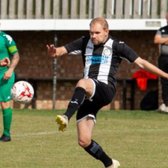 A valuable three points away to Haverhill Rovers moves the Pedlars into fifth spot in the Thurlow Nunn Premier Division. A tough game and only one goal in it but the Pedlars left the New Croft with the vital three points. The goal coming in the dying moments of the first half, Ben Coe getting the slightest of touches from a Nick Castellan free kick, the damage done and despite chances, neither keeper really tested. Excellent kicking from Tommy Rix, providing attacking opportunities, the Pedlars dominating mid-field, the threat to goal not forth coming.
Mid week on Tuesday, Swaffham host Wisbech St. Mary in the League Challenge Cup and then are on the road again on Saturday to Stanway Rovers.
A busy time for the Reserves in League action, a convincing five one home victory on Wednesday against Reepham Town, goals from Jamie Titmarsh, Kieran Bruce and a hat-trick for Joe Jackson. A tougher battle on Saturday, Beccles Caxton visiting Shoemakers Lane, a respectable three three draw. Scott Moore, Kieran Bruce and Luke Askew finding the back of the net for the Pedlars. At home again this Saturday, Holt United the opposition.
A trip to Clipbush Park mid week saw the Under 18's complete the League double over Fakenham Town. Six of the best for the Young Pedlars, Will Butters, Tom Harwood, Kai Mayes, Scott Moore and a brace for Thomas Wagg securing the points in a six one victory. This Thursday they travel to Mulberry Park, the home of Mulbarton Wanderers.
The Veterans have started their season of in good form, a perfect record so far with a second League win against Frets Vets. Matthew Kenny, Andrew Hurcombe and Ray Harrison with the goals in a thrilling three two home victory.
Share via
FacebookTwitter
https://www.pitchero.com/clubs
Recent news