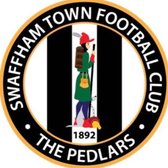 Heavy defeat for the Pedlars

A game of two halves, the Pedlars dominant in the first, unfortunate to go in at half time one goal down, by far the better side but unable to cash in on threats on goal. A disasterous second half, shipping seven. Three brief periods conceding two goals in quick succession the final two in added time. The only goal of quality was the final one, a strike from 25 yards, drilled and going in off the underside of the box, the keeper standing no chance. A busy week ahead for the Pedlars, Tuesday evening they are heading to Clipbush Park for the A1065 derby against the Ghosts of Fakenham, then on Saturday they welcome Mulbarton Wanderers to the MG Building Maintenance Stadium.
The Reserves unlucky going down one nil to Norwich CEYMS Reserves, a first half goal clinching the victory. Next weekend they are on the road to AC Mill Lane.
The 'A' Team with a fine two one victory over Hockering Reserves, goals from Ashley Choppen and Ashley Rowland. Next weekend they face Narborough Reserves, the Pedlars with a stretch of games on home soil, looking to make the most of the home advantage.
The Under 18's had their game called off mid week, the ground at Trafford Park a casualty of the heavy rainfall. This Thursday they host Lakeford Rangers Juniors.
Share via
FacebookTwitter
https://www.pitchero.com/clubs
Recent news