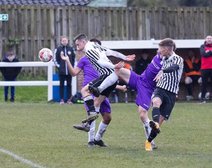 A fine performance in difficult damp conditions earned the Pedlars a deserved win. Under the cosh for the majority of the first half, superb defending and some fine saves from keeper and man of the match, Bradley Ironside, the deadlock broken in the thirty eighth minute. Charlie Lambe playing out of defence to Bradley Yates on the right wing, driving a cross from the touchline into the opposition box, Thomas McDermott connecting and driving home from seven yards.
A different second half with the Pedlars being more dominant and stretching the Melford defence. The match winner coming in the fifty seventh minute, the Villagers unable to clear their lines, the defence heading away a threatening cross but only just outside of the eighteen yard area. The ball picked up by new signing, Harry Brookes central to the box and smashed into the top right hand corner of the net from twenty five yards. Further action at both ends but the Pedlars looking the most threatening, denied by the post and bar, but promise of more to come. Next Saturday they are on the road to Haverhill Rovers, just one place above them in the Premier Division.
A well earned point for the Reserves away to Reepham Town with Charlie Gunner netting for the Pedlars in there one all draw. Next weekend they are at home to AC Mill Lane.
The 'A' Team not as fortunate away to Attleborough 'A', going down five one. Robbie Boulter on target for Swaffham. They are also at home next weekend, FC Vicking visiting Shoemakers Lane.
The Under 18's lost out to Aylsham midweek, a two nil defeat, no League game this week but the possibility of a friendly on Thursday evening.
The Veterans hoping to maintain their winning form with a trip to Cromer YOB.
Our thanks to all our sponsors, particularly the George Hotel for their provision of post match hospitality.