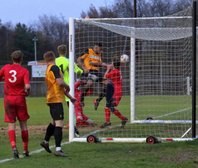 Pedlars out of the senior cup

Back to league action next week

The aftermath of the storms last weekend and the midweek rain took it's toll on the planned fixtures at Shoemakers Lane, the playing surfaces too wet to accept machinery and repair the wear and tear from the previous weekend. The First Team were away to the all Thurlow Nunn Premier Division clash in the Norfolk County Senior Cup, local rivals Fakenham Town the opposition in the Club's second meeting of the season, the previous League meeting the Ghosts stealing a last minute winner. A balanced first half an hour, both teams sounding out the other. The deadlock broken in the thirty second minute for the first of three goals before the half time whistle, the game sewn up and damage limitations for the Pedlars in the second half. The run of luck haunting the Pedlars with an effort hitting the woodwork. A couple of fine finger tip saves from keeper Brad Ironside keeping the fixture live but the final damage coming with eleven minutes to go, progressing the Ghosts to the next round. A return to League action next weekend, Whitton United are the visitors to Shoemakers Lane, their first meeting on the opening weekend of the season a close tie, the Pedlars looking to balance the books for this season's meetings.
Next weekend, the Reserves are looking to build on their previous win with a trip to Norwich CEYMS Reserves, the 'A' Team host Eaton Wanderers. Mid week the Under 18's are on the road to Greens Road, home of North Walsham Town.

Swaffham Town F.C. wish all the very best to Fakenham Town F.C. in their progression in the Senior Cup Competition and their upcoming Buildbase FA Vase 3rd Round tie at home to Hadley F.C. next weekend.