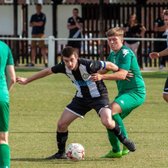 On the road next Saturday

An impressive all round display mid-week, away to the Yachtsmen of Wroxham and a further three points at home to the Greens of Gorleston completed a satisfying League week for the Pedlars. Tuesday evening at Trafford Park, the Pedlars pressed and moved the ball well, the majority of the action was in Wroxham's half. The deadlock finally broken in the first minute of the second half, Ryan Pearson controlling the ball with his chest on the edge of the area and hitting left footed to beat the keeper. Wroxham drawing even again in the seventy first minute, a soft penalty converted convincingly. Ten minutes later the points were clinched, Matthew Gilchrist heading home from ten yards into the top right hand side of the net from substitute Emre Upston's placed corner on his League debut.
Saturday saw a different game, energies not so high and on occasions Swaffham sucked into Gorleston's kick and run style. Joe Jackson opened his account in the tenth minute, Luke Reed playing him through, Jackson lobbing the keeper from the edge of the box. The Greens levelled in the nineteenth minute, keeper Arron Watson spilling a ball an easy knock home fr the advancing attacked. The advantage restored in the twenty fourth minute, Dean Miller heading home at the back post from a Nick Castellan corner from the left hand side. Jackson turned provider in the forty fourth minute, passing across goal for Ben Coe to convert from five yards. The final excitement of the half came in the second minute of added time, Gorleston awarded a penalty, the kick hitting the post, the loose ball crossed in from the right hand side, Swaffham unable to clear the lines, the ball netted for a half time score of three two. A more sedate second half, Swaffham having the better possession and chances on goal. The final goal came in the sixty fifth minute from the penalty spot. Joe Jackson firing home to cement his brace for the afternoon.
Next Saturday Swaffham travel to the New Croft for a League encounter against Haverhill Rovers.
The Reserves were in Norfolk County Junior Cup action with a convincing seven one win away to East Harling Reserves. A hat-trick for Thomas Wagg, two for Kieran Bruce and one apiece for brothers Sary and Samer Rahma. Mid week, the Reserves host Reepham Town on Wednesday evening and on Saturday Beccles Caxton visit Shoemakers Lane, both games League fixtures.
Thursday, the Under 18's were unlucky away to rivals Dereham Town, the Magpies clinching a three two victory. Jack Royal and Thomas Wagg scoring for the Young Pedlars. Another local derby Wednesday of this week, this time north south rivalry, Swaffham visit Clipbush Park, home of the Fakenham Ghosts.