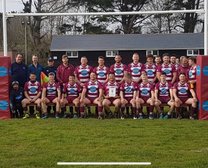 DORSET/WILTS CUP
SWINDON 31pts SWANAGE & WAREHAM 27pts
​​​Swans travelled to Swindon in the Dorset/Wilts cup, and in an entertaining game in which the lead changed several times, Swans were beaten by a try in the last minute.
​​Swans were first on the scoreboard as newcomer full back Adam McKenzie crossed the line with only 2 minutes gone. After a couple of penalties to each side, a Swindon winger picked up the ball and went in out wide.(5pts each) after 18 minutes. Swans gave away a couple of penalties and Swindon capitalised going in for a try in the corner. Swans replied with another try after 30 minutes as from a scrum on the Swindon line Swans’ no. 8 Joe Desmond forced his way over the line. Steve Woolley converted(10pts – 12pts). However another mistake by Swans, just before the break, had Swindon going in under the posts to leave the half score Swindon 17pts Swans 12pts.
​Early in the second half Swindon were penalised and Steve Woolley added a penalty reducing the lead to 2pts. Swindon were however putting Swans under pressure and after 53 minutes Swindon scored a converted try to bring the score to 24pts – 15pts. Swans picked up from there and after a penalty to the 5 metres line the ball came loose to winger Will Slack who worked his way over the line.(24pts – 20pts). It was an even contest and after 67 minutes once again Swans took the lead again as full back Adam McKenzie worked his way to score his second try of the game, Woolley converted(24pts – 27pts).For the next ten minutes play was frenetic with both sides coming close to scoring, but finally Swans defence crumbled and in the last minute Swindon went in for a converted try giving them victory bu 31pts – 27pts.
Swans Team:- A. McKenzie, R.Ferguson, B.Hunt,M.Roberts, W.Slack, S.Woolley, Z.Wyburgh, C.Foskett, N.Audley, L.Smith, W.Long, M.Seaton, B.Dennett, S.Waterman,J.Desmond.