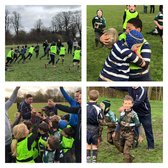 ...a smiley and muddy joint training session with a local team!

More than 60 children attended the event, which was an amazing success! There were plenty of muddy and smiley faces all round.

The children were able to be split into their respective age groups, firstly training with handling drills before then leading into a mixture of touch rugby as well as contact rugby (age dependent).

The event would not have been such a success had it not been for a number of people behind the scenes pulling all the strings. To name but a few, special thanks go to:

Due to the popularity of the event, we have made arrangements to visit Westcombe Park RFC on Sunday 23rd February where hopefully we can continue this fantastic partnership we have developed.