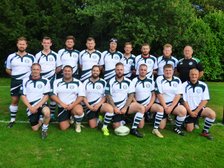 In this edition, new surroundings for the Swans, Snoop Dave drops it like it’s hot and the Bevy get wet.

Swans kicked off their league campaign proper this weekend at their new home the Swanley Recreation Ground. After a ten-minute chat over which was the most hospitable changing room, the players donned the white and green strip to face a new look Shooters Hill.

Early signs were promising as the home side established territory and possession with only handling errors and silly mistakes keeping the score at nil. Skipper Ant Sumbler looked a bit tasty when he took a quick tap ‘n’ go penalty, only unfortunately, he misheard the referrees cry of “go” as a “no” instead. The walking tantrum that ensued in open play was quite amusing though.

The first score came around the twenty-minute mark when the forwards realised they had quite a decent backline outside of them. Except for Calamity Dave, who spent the whole game playing water polo instead. Slick hands and a lovely line from worlds greatest dummy runner allowed Phil Butler to dot down. Stuart Tate’s pre-match whinge ensured he got the kicking duties and duly converted.

Shoots enjoyed some possession of their own. Using the weighty pack they were able to force a penalty deep in Swanley’s twenty two territory. The penalty was scored but this was the only points they could muster all afternoon long.
Stuart Tate put his name on the score sheet, a lovely little run from the base of a ruck and converted to see out of the first half.

The second half saw more rain, more handling errors and more penalties against the home side. Discipline was better than last week, but still needs vast improvement before it costs them dearly.

Phil Butler ensured the win half way through the second half when he scored in a similarly vein to his first try. Only this time he had to slime his way out of two tackles before he could ground the ball safely.

Shoots were the better side in the second half, they looked after the ball and made fewer mistakes. It was thanks to some excellent defending from the Swanley XV that they never got anything to show for their endeavour.

At the death of the game Paul Hately pulled off a beauty dummy, drew the last defender and put James Yates through to score his third try of the season. The conversion was made and the game ended 28 – 3.

Another win but you could see that Swanley should have scored much more and the opposition knew it. The home side backline consistently broke the gain line but were starved of any real service as the pack held on to the ball for too long.

Coach Morris awarded man of the match to Allen Meehan, his in-depth analysis and reasoning behind his decision revealed that “he had a really good game”. I’ve always wondered what does he write on that clip board?

Gladiator went to James Whitlock, who had already been in the naughty corner before getting away with a huge hit bordering on the illegal side!

DOD – Renamed to Dave of the Day was duly awarded to Dave Lawrence who had an absolute shocker of a game. There’s always next week Dave.

A big thank you to the Bevy, who despite the awful weather came out in force to support us. An extra special thank you to Mayor Lesley Dyball, who pulled god knows how many strings to ensure we can play rugby at the Recreation Ground. It was agreed amongst the players in the showers that you are probably the best looking Mayor we’ve ever seen.

Next week we are at Sparrows Den against Beccehamians RFC. See you there!

7
Shooters Hill I
9
Swanley I