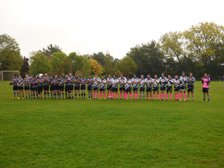 This week the Swans get bogged down, Ant is struck down by lightning and Hulk Hogan makes an appearance.

Swanley’s buoyant start to the season came to an end in grim conditions at the hands of a fortified Westcombe Park III. The home side had no one else to blame but themselves as they conceded 14 points in as many minutes when they failed to protect the fringes at the ruck.

Swanley looked to have got themselves back into the game finding Hadyn Cook out wide and Sean O’Reilly battling through tackles to ground the ball. However, after a calamitous restart the home side failed to clean up the ball and with a bit of fortune it found the visiting winger who made sure the first half ended 12-19 to their advantage.

The game resumed and Westcombe immediately took the initiative by pinning Swanley in their own half and that is how it remained for the rest of the game. Except for a few moments of comedy, when Coach advised Ant Pittock to ‘take a knee’ he decided to go full BAFTA by leaping in the air, screaming and clutching his knee. Kelly applied some magic water and he was good to go again.

Perhaps the only highlight for Swanley was when try scorer Hulk Haydn Hogan almost decapitated one of their players. We’re unsure if the usually mild-mannered gent meant it or not, but thankfully the referee was a bit sympathetic whilst the visitors threw their toys out of the proverbial pram.

In the closing stages Westcombe Park sealed the victory when two Swanley defenders got in the way of eachother. Judging by the Rick Flair style yodelling, it was a victory they very much enjoyed.

The benchmark has been set for the season. The view from the sideline is that perhaps a better start and better playing conditions Swanley would have made a better go of it. It’s not something the Swans will have time to dwell on as next week they are in Kent Vase action and face Askeans, some two divisions above them.

Man of the match went to Ant Sumbler who played an excellent soccer game on the other pitch according to Coach.

DOD. Went to Ant (Brad) Pitt-ock for his ridiculous play acting. Please don’t do it again.

Special mentions to Chris Blumzon on his debut, a tough encounter to start your first game. Also to the referee who was being appraised. A great performance given the conditions, well played Sir.