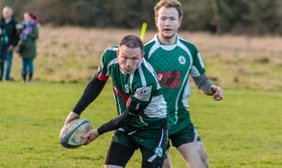 A final flurry sees The Swans secure the win!

The Swans have had a nervy start to 2020 and Head Coach George Morris had plenty to be concerned about leading up to this fixture; a staggering 24 players unavailable against a club with deep rugby history and traditions. It was a potential banana skin moment.

The feeling of anticipation in the air was palpable. You just had to look over at GBH George Oliver's face to know something was brewing. It turns out his mind wasn't on the game per se, but more on whether his distant father was going to show an interest in his life and turn up to watch him play two weeks on the bounce...unfortunately it wasn't to be, and George played on, disowned once again by those he holds dearest to him.

At a packed Horn Park any feelings of trepidation will have been temporarily abated when Paul Hately made a defensive clearance. The ball bounced cruelly for the Colfe defenders and luckily for The Swans Stuart Tate was on hand to clear up the mess. In terms of the finish, think more a victim running from George A Romero's Night of the Living Dead than a Giselle gracefully bouncing across the long grass. Grunting and wheezing as he went and thanks to his improved relationship with gravity he belly flopped over the line in the nick of time. Jamie Fitzpatrick added the extras. 0-7

The second try was much prettier thanks to slick hands from the well oiled partnership of Paul Hately and James Yates. This axis of attacking devastation found front rower James Whitlock completely out of bounds in the outside centre channel, presumably on his way onto the wing for a well deserved breather. Astonishingly, like a pumpkin with matchsticks for legs, Whitlock manoeuvred himself around the defence to extend Swanley's advantage. Again, Jamie Fitzpatrick slotted the conversion. 0-14

The (not so) Old Boys knew it was all too easy for the Swans and responded tremendously well. They sniped at the breakdown and somehow slipped through a line-out to put themselves back in it. Paul Hately was fortunate not to have been sin binned before the first half concluded when thanks to his appalling fitness he intercepted their pass whilst clearly in an offside position. By the time the whistle blew for half-time things stood at 12 - 14, with The Swans leading narrowly.

Play resumed and both sides were eager to establish a foothold in the game. This was mirrored by moments of rugby brilliance and then everything you would expect from amateur rugby. The Swans secured the advantage again through a set move in Colfe's 22. They even managed to get that right despite debutant Richard Jones and James Yates colliding, confusing the oppo just enough to allow George Oliver to dance over the line. As expected, Jamie Fitzpatrick nailed the conversion. 12-21

Subsequent handling errors and poor decisioning allowed Colfe's to hound the Swanley line eventually finding space out wide but to bring them back into the game. 19-21

In the final act of the game, any thoughts of abandonment going through George Oliver's mind will have been forgotten as he sealed the final nail in Colfe's coffin, skipping over the line for the 2nd time in the game. Jamie Fitzpatrick did what Jamie Fitzpatrick does and sent the ball home. Final score 19-28

Special Mentions got to:

Finally, a HUGE thank you to The Swanley Flock for coming along and offering their support!

Next week sees The Swans host Dartfordians 4XV. Let's have yet another great turnout and continue our home game winning streak!