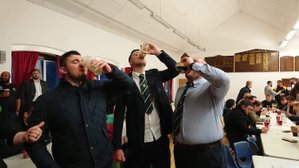 Storm Dennis arrives and The Swans fly to the top of the league!

The Swans faced a hugely important game against Bromley 2s who were in the close 4th position in the league.
The fun started in the changing rooms, as the swans prepared for battle and new Kiwi recruit was getting changed under the besotted eyes of the clubs oldest player Cheesecake who was gobsmacked at the kiwis athletic physique and started nursing a semi. The Kiwi had a big shirt to fill with the absence of Yates and Mihai due to their endomorph body structure had stretched the 12 shirt considerably.
Captain Angry Ant set the game plan and lead the team on the warm up the swans meant business.
The Swans were facing the strong winds in the driving rain up hill in the first half, Bromley kept the swans pinned in their 22 while using the advantage of the hill and winds with tactical kicks into the corners. The pack was excellent around the breakdown and the training session appear to pay off with a lower penalty count than previous games until the ref awarded a penalty in front of the posts which Bromley capitalised. 3:0.
Swans started to pass the ball out to release Kiwi Rob and gorgeous George who both started breaking the line. The fierce welsh wizard was as fired up as sheep on heat as he demolished his opposite number and crash balls.
In the worst weather conditions the club has ever seen the game was unusually tidy with less dropped balls than teenagers class room. Tactician Hately called the forwards in and changed the game plan to pick and go, this caused havoc for home side and played the majority of the second half in their own half. Bromleys oldest player who had just returned from his Saga Holiday landed a cheap shot on 22 year old Jack Nash. Jack retaliated under self-defence and the ref had no choice but to card both players.
Bromley were now under the cosh in their 22 as few forward phases dragged the defence in and Hately switched with debut Kiwi Rob who danced through his opposite numbers and dived over the line scoring his first try for the Swans! Cheesecake squirted whip cream with delight! Jamie stepped up for a difficult conversion into the gale force winds, kissed his lucky Leprechaun charm and slotted it over to make 3:7.
Bromley came back with all guns blazing with quick ball out to the backs, their fresh faced uni lads started to spread the ball and found themselves across the line, conversion missed 5:7
Halftime
The swans now had the advantage of the hill and strong winds, Bromleys kicked off also unable to get the ball off the ground. The swans straight away put the pressure on with waves of attack from the forwards. Great pod carries from Ben Bates, Connor and Sam. Jamies excellent possession play used the box kick to send the ball deep in to the home side half. The pick and go tactic still in full mode tested bromelys defence. An attacking scrum was awarded to the swans on the 5m line, and the second phase found birthday boy Allen Mehan who run an excellent to score a try. Converted by Jamie.
Bromley kicked off again and again unable to get the ball off the ground, the forwards recycled the ball and found legendary no8 Tate who managed to bump a few tackles and released Hately on the Halfway line. Hately couldn’t believe his luck as he broke free, the 98kg fly half used his weight and wind advantage with the gradient of the muddy hill. With a few snake hips twists to fool the defence or could have been his blubber waddling around he found himself one on one with the fullback and decided to slide from the 5m line it was described as killer whale sliding on to a beech to catch a seal. Another conversion slotted over by Jamie 8:21.
Bromley now feeling the pressure started recycling their 1s players on to the pitch to try and redeem the game. Coach morris retaliated and prop tug boat and James, hooker ryan and the return of Paul Clarke put in some menacing hits along side gorgeous George. But Rambo went to Connor whose recent dad strength gave him the edge.
Bromley started to adapt the pick and go method and barged their way deep into the Swans 22, a quick change of direction saw the home score another try.

Final score 13:21 an important win by The Mighty Swans

Congratulations to Jack Nash for making it to the 50th cap for the club. Great to have new recruit Rob in the side and welcome back to Paul Clarke.