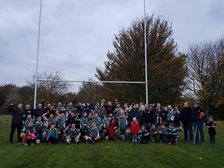 Top of the league? Don't mind if we do

Bromley 2XV have been sitting pretty at the top of the League table since day one. It goes without saying in the lead up to this event we were somewhat cautious of what we would be up against. With less than a week to go until kick off, Bromley requested that we increase the sub count to EIGHT! A couple of committee members (myself included) got a mild case of “small club syndrome” and immediately starting to flap, our first question; why such a large sub count? Were Bromley going to throw everything bar the kitchen sink at us to retain their position at the top?

Sitting back in his deckchair, observing a well-tended garden from his veranda, Head Coach George Morris introduced some zen-like calm to the proceedings, messaging the group and assuring us that whoever turns up, we will beat…well, who can argue with that?

The whistle was blown, and The Swans kicked deep into Bromley’s half. After a couple of minutes, Bromley kicked for touch in order to get a bit of breathing space. After a beautiful steal following a fumbled line-out Swans secured the ball and shipped it out wide to the backs. George Oliver twinkle toed past Bromley’s 15, but their 12 covered well and brought him down. A quick offload to Paul Hately wasn’t able to be capitalised upon as he was soon swarmed with players; he then popped it off to our resident Romanian Warrior Mihai Melnicov to run it over the line. Mihai also added the extras. 7-0

After the restart it wasn’t long until a scrum was awarded to The Swans. Stuart Tate thought about going blind alone, but saw Mihai Melnicov running at pace and popped it over to him. Mihai got brought down, soon a ruck was formed, and welsh wonder Dan Eade caught the entire Bromley pack sleeping and skipped over the try-line for our second try in less than 10 minutes. Mihai very kindly slotted it over to add insult to injury. 14-0

Five or so minutes later, Bromley woke up. After a well worked line-out they got brought down within five metres of Swanley’s try-line. They tried going blind but their prop was flattened by James Whitlock. At the base of the ruck their quick thinking 9 looked up, threw a cheeky dummy, hit the gap and stretched his arms as far as they would go to plonk the ball down over The Swan’s try-line. Conversion missed. 14-5

Somewhere along the way Bromley managed to score and convert another try. I’d love to give you more information about it but I was busy acting as a personal snack dispenser to my 1 year old on the side-line. It’s also nowhere to be seen amongst James Aitkenhead’s 100 videos of the game. 14-12

Not long after and the entire crowd witnessed somebody get murdered in broad daylight, absolutely within the letter of the law. Bromley had been awarded a penalty, their quick thinking 10 thought to tap the ball, but he then held onto it for what seemed like an eternity. George Oliver noticed Bromley’s 15 cutting a line and getting set to receive the ball. Within a nanosecond of the poor chap being delivered the hospital pass of the century George smashed him into next week. Almost out of pity, the ref allowed Bromley to re-take their penalty. It has absolutely earned GBH George a firm placeholder for tackle of the season. He must get all of this angst due to his father heartlessly abandoning him at such a young age…

The next five minutes saw The Swans deep inside Bromley’s half with some good passages of play, however, a penalty was awarded to the visitors due to somebody holding onto the ball. Only five metres out from their try-line they understandably went for a line-out. Bromley won their line-out, and shipped it out to their tasty looking 12. He made his way to the wing, stepped Phil Butler (something not often seen), and then delivered a cheeky little grubber kick in-field. Then like a man possessed Ant Pillock came off his opposite wing to clean up the ball, but had overcooked his dive, instead knocking the ball over Swanley’s try-line for the aforementioned 12 to pounce on and score Bromley’s third try. This time it was converted. 14-19

With five minutes left of the first half, Head Coach George Morris had seen enough, and decided drastic measures were needed. We had gone from leading, to a five point deficit with three unanswered Bromley tries. First to walk the plank was Swanley’s resident prop masquerading as a back - James Yates. Imagine the offspring of Andy Goode and Mathieu Bastaraud, but somehow balder and fatter, and you will understand why he was replaced for the speedy young upstart fresh from three years of playing Uni Rugby at Loughborough, Mr James Davies. Next to face the firing squad was Ant Pillock. His assist to the last try was just a step too far for the normally reserved Head Coach, and he was replaced by Lee Crook.

With only minutes to go in the first half Swanley again found themselves within touching distance of the Bromley try-line. Despite the efforts of several players, Bromley’s defence remained solid. We tried to go left. It didn’t work. We tried to go right. It didn’t happen. We tried left again, no luck. Having gone right once more, we were brought down, a ruck was formed, and then Sam Haslam took matters into his own hands, powering through the Bromley defence with at least three defenders hanging off of him. This time Mihai missed the conversion meaning things stood even at the whistle for half time. 19-19

After oranges Bromley had a slight spring in their step with some moments of flair, but it wasn’t long until the floodgates opened, with Swanley scoring SIX unanswered tries!

First up, fresh from his stint in Wormwood Scrubs, GBH George ran a beautiful switch ball delivered to him by Paul Hately. He zig-zagged through the Bromley defence, cut an angle and left the defending 15 for dust, going over the line in style. The crowd went absolutely wild and such was the exuberant excitement in the atmosphere George nearly smiled. Once again, Mihai added the extras. 26-19

Next up, and not to be outdone by his fellow back, Paul Hately fancied a piece of the action. The Swans had the put in at a scrum, the ball found its way to the receding 10 where he threw an outrageous dummy to Mihai, followed by an even more bombastic dummy to George. He popped the ball up to Phil Butler who dusted two or three defenders, but was then brought down five meters short of the try-line, delivering an offload back to Paul (who had managed to keep up). All that was left was for Paul to grubber kick it over the try-line and beat Bromley’s winger to the ball. Mihai sent the ball home. 33-19

After a good 10 minutes or so James Davies decided he wanted to put his stamp on things. Paul Hately kicked the ball through, and it was a foot race between The Swan’s 9, 10, and 13 to get to the ball and run it over the line. James Davies won the foot race, placed the ball between the posts, and a single solitary tear ran down James Yates’ face from the side. Once again, Mihai stepped up and slotted the conversion. 40-19

It was somewhere around this time Stuart Tate got his ear torn in half. I’ve not seen the pictures, but I’ve heard all about it. Ever the consummate professional, Stuart didn’t drum on about it, he stayed on the side-line lending an ear to anyone who needed it.

GBH George was back at it again. With less than 10 minutes to go Bromley had been awarded a scrum, but they fluffed it whilst trying to ship it through the backs. The Swans capitalised on the mistake with Dan Eade diving on the loose ball, eventually the ball found its way to Phil Butler charging down the left wing. He got brought down somewhere between Bromley’s 10m and 22m line, offloaded to George who had been running support, and it was just up to him to pin his ears back (sorry Stu) and take it over the line. Mihai kicked beautifully. 47-19

The Swans were truly on fire by now, completely elevated by their dissection of Bromley. Bromley’s heads had dropped, and for them it was just a case of seeing out the last five minutes without any further upset…Cue Phil Butler. The Swans had a scrum, Guy Cooke picked it up from the back and delivered it to James Davies. James then passed it to Phil Butler who beat his opposite winger as well as two other defenders, going over the line in style. No conversion this time. 52-19

Finally, with only a minute left of the game, Bromley went for one last push, but were turned over at the breakdown. The Swans cleaned up and secured the ball, Phil Butler saw nobody was home on his opposite wing, screaming at James Davies to box kick it into the Bromley corner; James happily obliged, and Phil sprinted to the ball and scooped it over the try-line. Somewhere on the sides James Yates thought to himself “I must work on my box kicking”. Again, no conversion. Final Score 57-19

So there you have it. If you’ve managed to last this long, well done. It’s taken a lot longer for me to write believe me, but it’s a small price to pay if we are going to win so convincingly in our most important games.

MASSIVE thank you to the Swanley Flock, who once again turned up in their droves! It really does mean the world to have so much support from the sides.