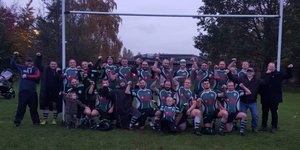 ...And the Swanley juggernaut rolls on another week after a testy encounter against Dartfordians Saints (4XV).

Saints started brighter in the opening exchanges and capitalised on Swanley errors. But some fantastic interlink play saw the majestic Dan Eade go over for a try. From then on Swanley controlled the game, new signing Mihai Melnicov slotted over a conversion and two penalties to bring the half to an end at 12 - 13.

Dartfordians had some power runners, but they seemed to run out of steam in the second half. Their 10, insistent on hacking the ball down field, was testament to the Swan's defence and played beautifully into their hands. Owen Connelly hoovered up their kicks, and despite being 86 years old looked decidedly spritely against a much younger backline.

We've learnt a lot about our Captain Fantastic (Ant Sumbler) of late; in denial about his rapidly retreating hairline, he also is not a fly-half, something Paul Hately will happily attest to having nearly died after receiving a world class hospital pass from the plucky Swans skipper. The skipper did however peel off the back of a maul and dusted a few defenders to score another try. 12 - 20.

Now I'd love to talk about the next try. But I don't remember it happening so it must have been rubbish. 12-25.

Something I do remember is Paul Hately claiming injustice; according to more reliable witnesses than myself he scored but the referee did not give us the advantage we wanted and brought it back for a scrum.

Man of the Match went to Dan Eade and deservedly so. A back by trade but had a blinder at flanker today.

Find out next week if we can continue with this fantastic winning streak as the Fab Five Swans host top of the charts rivals Bromley (get it?)

As always, a massive thanks to all that showed up to support and braved the weather. We would not be where we are today without the support we receive week in and week out from the same old faces.