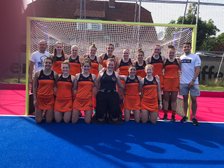 Spartans Lose Out In Tight Final

Swansea narrowly failed in their bid for European promotion.

Swansea 1 v 2 Lorenzoni
Swansea faced the inform Lorenzoni in the final of the tournament in Vienna. In tough conditions, temperature 30 degrees, both teams started well with Swansea having the better of possession. Both teams had clearly prepared for the game with both defences cancelling each other out. Lorenzoni’s penalty corner defence was strong and negated the corners that Swansea were awarded.

The Italian team broke the deadlock with Stefania Tosco scoring from an unforced error after 8 minutes. Swansea replied well forcing a penalty corner which Natalie Blythe converted with precision (17 mins). The game continued to be balanced and very close, similar to the first goal another was conceded against the run of play and scored by Zhanna Savenko on 25 minutes.

The second half saw the Spartans dominate possession and territory, Lorenzoni’s Spanish midfielder Solar Huertas proved to be pivotal for the Italian team negating chances with last ditched tackles. Swansea continued to push until the final whistle but could not find the equaliser despite deserving more from a tight final.

Swansea’s attitude, skill and determination were a credit to the club and Hockey Wales.
Reporters Toby Nichols & Robert Yard