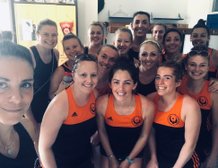 Spartans Make It Three Out Of Three

Swansea finish top of the pool with a victory over Cardiff University.

Swansea opened the first quarter with the majority of attacking play. The first goal coming from Sarah Davis who scored a clinical goal from a rebound off the keeper (6 mins).

The second goal came soon after, a crash ball in from Kath Mee was deflected into the bottom corner by Amy Burton (14 mins). Cardiff University managed to get a goal back via a short corner with Ashley Davies scoring after 19 mins. Spartans were quick to respond with their third goal coming from a good passage of build up play which led to Amy Burton slipping the ball to SJ Thorburn who eliminated the goalkeeper and reversed it into the net (23 mins), resulting in 3-1 score at half time.

Midway through the third quarter a fourth goal came from Liv Hoskins picking up the ball from the half-way and running into the D finishing with Carmen Ansley rolling the ball round the keeper into the goal (40 mins). Spartans were now dominating possession and put Cardiff under a lot of pressure resulting in the fifth goal from Carmen following up from a rebound and putting it in the back of the net (50 mins).

Cardiff were able to pull one back when Fiona Edge converted their second penalty corner. Swansea responded with a sixth goal which came from Amy Burton who had her second goal by deflecting the ball straight into the goal (58 mins).