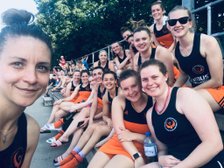 Spartans Start Euros With A Victory

Spartans turn up the heat in Vienna.

The Spartans are currently in Vienna representing Wales in the European Club Challenge 11 tournament. They flew out from Heathrow on Thursday 6th June and started their campaign with the first match against Saint Germain the French representatives.

Spartans started their campaign in the Austrian heat against Saint Germain from France.
Both teams started strongly, with Spartans gaining their first goal from connection play between Sara Davies and Amy Burton. Burton slipped the ball to SJ Thorburn who finished with a far post deflection (7 mins).

The second goal started with Carmen Ansley feeding the ball to Amy Burton who was taken out unfairly by the French goalkeeper which led to a penalty flick, which was confidently converted by Livvy Hoskins (21 mins).

The second quarter saw Swansea with more ball and lots of opportunities. Amy Burton was next on the scoreboard after scoring a lovely goal from a reverse high ball tap in from a short corner second phase (23 mins).

Following on from half time, Swansea had further scoring chances with the fourth goal coming from an Amy Burton slapped shot following a rebound from Beth Fisher’s deflection (40 mins).

A long corner set play led to a ball in from SJ with Beth Fisher hitting the rebounded deflection for a fifth goal (47 mins).

Spartans continued to pile on the pressure in the final quarter with Abi Welsford getting her name on the scoreboard from a second phase short corner shot (57 mins).

The first game ended with all players putting in the hard work for a dominating performance in the tough hot conditions.