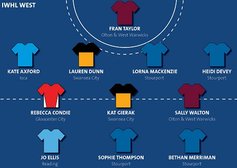 Congratulations to Spartans Lauren Dunn and Katrin Gierak (nee /Budd) who have been selected for this season’s EHL Conference West All Stars team of the season.

Having started at Gwent and progressing through their strong Junior section, 20 year old Lauren, currently a second year medical student at Cardiff University, has been with the Spartans for three seasons and this year has progressed to training and playing for the Senior Welsh Squad. Lauren has also trialled for the U21 GB Squad.

Kat Gierak (nee Budd) joined the Spartans from Howardians in August 2006 and has been a fully committed player over the last thirteen years. This was the fourth time Kat has been included in the Conference West team which is no mean feat. Kat has retired from the Senior Welsh Women’s side having attained 65 Outdoor Caps and 10 Indoor Caps.

She is a fantastic role model who holds down a full- time teaching job, is a mother to son Riley and still manages to train twice a week and play every weekend for the Spartans. Kat continues to be involved in the International scene by playing in the Senior mixed side which traditionally plays against England.