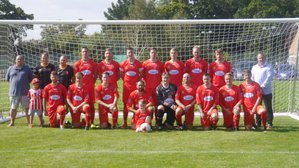 Sway went behind in the 16th minute when Potter scored from close range following a scramble in the box. This was against the run of play and within a minute Sway were back on level terms when Bradings shot found the bottom corner following exellent approach play by man of the match Scares. Minutes later Sway took the lead when Brockhart was brought down in the box and Brading converted the resulting penalty. Right on half time Clanfield drew level when Sway failed to defend a cross from the left and Sharp scored from close range.
Sway pressed hard in the early stages of the second half but were kept at bay by a combination of some resolute defending and excellent goalkeeping.The game boiled over on the hour mark when a major mellee ensued following a diabolical foul on Huggins and instead of the Clanfield player being shown a straight red card it was Brennan who was shown a second yellow and ordered off the field reducing Sway to 10 men.
Following the incident play became very scrappy with numerous yellow cards being brandished by the referee who appeared to lose control of the game.Despite the numerical disadvantage Sway continued to press in the closing stages and were unlucky not to get a winner when both Brockhart and Brading went close.
Share via
FacebookTwitter
https://www.pitchero.com/clubs
Recent news