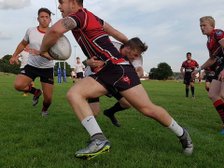 SWINDON St George are sitting pretty at the top of the West of England League Pool Two after a 64-28 midweek victory over Forest Bulldogs.

The Saints went 16-0 up with tries from Sam Williams, George Cowley and Ash Perry, plus conversions from Connor Tomley.

Perry scooped his second try of the game and completed his hat-trick after the break, although Tomley struggled with his kicking.

Chairman Jakob Kauusberg was happy with his team’s performance and their new top-of-the-table status.

“It was a very good win, we were clinical in attack, we had a drop off with the penalties but overall it was a good win which was great to watch,’’ he said.

“It (being top of the league) has been something we have been aiming for, now and we now have an advantage over everyone else because we are up there.”

St George will now face Bath and Wiltshire Romans on August 6, the Corsham-based side having beaten Swindon in a pre-season friendly.

“We lost that game by 40-35 but we have come on leaps and bounds since then so we are looking forward to turning them over at home,’’ added Kauusberg.