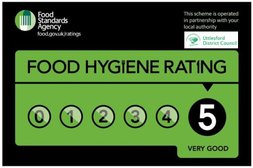 food standards agency inspection team complete first inspection since 2019 and had no hesitation in awarding our club a 5* grading.

Andy Players writes that....... 3 years ago the club had its food hygiene grading inspection (formally EHO) visit and the club was only awarded a 3 grading ?

Just under 3 years ago Stuart Vant asked me to return to the club to run the kitchen with the goal (yes pun intended) of getting our grading up to the top 5 rating.

An hour and a half before kick off on Tuesday night a member of the food standards agency inspection team came and completed the first inspection since then and had no hesitation in awarding the club a 5 grading.

The food standards agency website will be updated in time but we were given our sign for the window on the night and this has now replaced the previously grade 3 one.