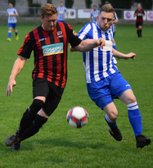 Bloods go through thanks to Portway Hat Trick

Saffron Walden FC continued their unbeaten start to the season with a 3 – 2 win over Wroxham FC after extra time. The FA Cup rematch was held at Caton’s Lane after Saturdays 1 – 1 draw at Wroxham.

It was a tentative start from the bloods, as in the opening 20 minutes the visitors showed dominance. Wroxham had a lot of possession whilst winning most first and second balls as well. The tides turned shortly after with Julian Simon-Parsons being the catalyst. The midfielder showed great positional awareness on and off the ball. Getting into brilliant positions to break down the oppositions attacks and offering himself in a deeper role for his teams build-up play.

With the Bloods in control disaster struck in the 45th minute when Wroxham's No. 5 Chris Skipper scored with a towering header from a corner. A couple of late first half chances fell to Dan Trendall and Craig Calver showing that Saffron Walden were not out of this match yet, leading onto what was a thrilling second half.

The Bloods came out of the blocks flying in the second half. Utilising the two wings to create space with both wingers showing desire to drive into the area. In the 56th minute Trendall made a run from midfield and got brought down just inside the area by the opposing full back. Charlie Portway stepped up to take the penalty and powered the ball into the bottom left corner, beating the out stretched keeper who dived the right way.

The celebrations were short lived, as from a corner in the 60th minute Ryan Fleming was deemed to have handled the ball in the area whilst jumping to compete for the header. It was Wroxham’s No. 4’s turn to step up to the 12 yard spot, he struck the ball with venom straight down the middle to put his team 2 – 1 back in front.

Not long after the 3rd penalty of the game was awarded by referee Paul Quick. Calver used speed and strength to force his way around 2 defenders and was eventually grappled to the floor from behind in the area. Portway stepped up to face the nerve racking pressure to put his team back on level terms again. He dispatched the shot into the exact same spot giving the opposite keeper no chance again.

A few late chances from both teams could have seen off the draw. With some fantastic saves and spurned chances it finished 2 – 2 after 90 minutes. The game was to continue into extra time.

Extra time followed suite with the play going from end to end with Portway going close from 25 yards out and rattling the crossbar. 15 minutes into extra time after a foul committed by Wroxham's No. 11 Matthew Doyle a few Saffron Walden players confronted him. Doyle lost his head after a long and arduous few days of football and lashed out at a Saffron Walden player and saw red for his troubles.

The start of the second 15 started with Saffron Walden pressing home their numerical advantage. 2 minutes into the second half of extra time Portway bagged his hat-trick. The number 10 was quickest to react as he lashed home a ricochet from 3 yards out following a corner to send the team and supporters into hysteria alike.

Wroxham depleted and tired couldn't muster another attack to bring the scores back on level terms. The final whistle blew and the Bloods were through to the next round of the FA cup.

The fiery match had all the twists and turns as you would hope from an FA cup match. The players from both teams came together at the final whistle to shake hands and congratulate each other on a match well played.

Next up for Saffron Walden is Sporting Bengal United FC 3:00 pm kick off on the 18th August at Caton's Lane in the Essex Senior League