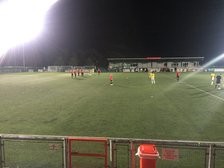 A 98th minute equaliser for Saffron Walden was enough to see them take a point away from home after Woodford Town had taken the lead. The game was overshadowed towards the end by two brawls on the pitch but the draw was more useful for the home side as the visitors only hold a two point lead over Stow, who are playing on Saturday.

The opening minutes of the game saw both teams try to start off on the front foot but neither side could dominate possession. Both sides had some almost moments as through balls and final third passes were cut out before they could reach their intended targets. The first real opportunity went to the home side but after a good run from their midfielder, it was dragged inches wide of the post. Saffron Walden tried to play on the break but good defending from the home side prevented an threat.

The hosts took the lead in the 20th minute when their number 8 fired a rebound into the net from distance. An initial chance for the midfielder from the same distance was fired onto the post and rolled across the face of goal before he tucked away the second effort. As the first half went on, neither side dominated possession. Saffron Walden had a couple of chances but they couldn’t find the equaliser. Their number 10 header just over the bar before a corner was swung in but cleared off the line.

Despite Woodford Town coming close to a second with just under ten minutes to play after Town’s 7 fired just wide from distance, the home side went into the break leading 1-0.

It was Woodford Town who started the second half the quickest and within the opening minutes, they headed just wide. Saffron Walden had a chance in the first 10 minutes of the second half but the Town keeper did well to block the shot with his chest before clearing.

The home side began to dominate the chances as the half went on but couldn’t find the second goal. A half-volley was fired over before Town’s 11 tried to nutmeg the keeper but it was saved by the keepers feet and Town’s 11 saw an effort rattle the crossbar. Woodford looked most likely to score and kept pressing but Saffron Walden defended well to keep the score down to one. A header from the visitors was saved well before a there was a delay in the game.

A brawl had kicked off following a confrontation between Walden’s keeper and a Woodford player which escalated when the benches and players on the pitch got involved. The referee sent off the Woodford player whilst the Walden keeper miraculously escaped with a booking. With the extra player, Walden found a period of dominance as the game entered extra time. A shot from distance was saved comfortably before they found the equaliser in the 8th minute of injury time when the ball was slipped up the keeper. Woodford Town had had an opportunity beforehand but a free-kick was saved comfortably and the game ended in a draw.

The referee had brought the game to an end after a Walden player had been fouled with sparked a second brawl on the pitch but it was quickly defused by both clubs.