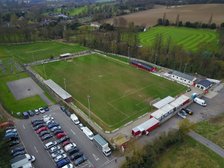 Walden came from behind to end up victorious in the B184 derby against 5th placed Takely F.C. to keep their promotions race alive and stay second in the table in what was an action-packed match at Catons Lane.

They would have topped the table had it not been for a late 90th minute Joshua Osude goal for promotion rivals Hashtag Utd. in their match versus 4th place Walthamstow. But goals from Spike Bell, Charlie Cole and George Pullen and a MOTM performance from October player of the month Gavin Cockman made sure The Bloods were hot on heels of Hashtag.

It was a tale of two half’s as the large crowd of 248 witnessed a high tempo game which saw the referee, Michael Scott, produce 6-yellow-cards to try and keep some order in what was a tightly contested affair between the two local sides who finished right next to each other last season (S.W.T.F.C 4th and Takley 5th)

The scoring at the Lane, once again, began almost instantly as 2 minutes in, Walden’s captain Scott Pethers clearly trips Takley’s Jason Todd in the box leaving the ref no choice but to blow his whistle and point to the spot for a penalty. Charncey Dash steps up to take the spot kick and fires it down the middle and into the back of the net, causing keeper Reece Paine to dive to his left. 0-1.

S.W.T.F.C nearly replied 2 minutes later, when Fahad “Ninja” Nyanja chases down the ball and holds it up after a counter to wait for the oncoming attack. He offloads the ball to Harley Kee, who takes a few touches and fires off a low shot towards goal. But it goes just wide at the near post and out for a goal kick.

Walden’s defence were clearly a little shaken, as a few moments after Jamie Riley is pressured by Takely’s Dash and is easily disposed of the ball. Dash is then left one-on-one with Paine, who has rushed out from his goal line to try and counter the threat. Dash tries to dink the ball over the out running keeper, but the ball goes harmlessly over the bar.

In the 18th minute, Walden again had a chance on goal. Spike Bell crosses the ball high from the left side into the box finding Kee in the middle. Kee couldn’t put enough of head on the ball though and it loops to Takely keeper Matt Gill who catches the ball.

In the next 10 minutes Takely had Walden on the back foot with a flurry of chances. Dash had two opportunities in quick secession when he fired a hard shot straight to the keeper and scuffed another shot after making a darting run into the area from a pass from Mitchel Das.

Das made another great play when he cuts the defence open with a pass to Glen O’ Hanlon, but he couldn’t get the shot on target and it goes wide. Moments later, Das had a chance himself when he drove the ball down the right wing, cuts back inside to give him some space and shoots. He doesn’t connect with the ball and it deflects off a defender’s leg forcing the ball to go to the far post, where Matt Hurley slides in and nearly taps the ball home.