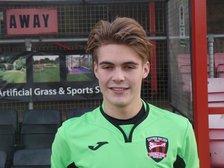 Reserves Take a Point at Haverhill

With Dan Grinrod, James Crane, Ronnie Ledwith, Dan Trendall and Mason Naylor al included in the line up for this game it was always going to be interesting in how the First team players gelled with the current reserves. With Haverhill also taking the opportunity to give as many of their first team players a run out you could be excused for expecting to see a bit of an inconsistent game flow.

This was never the case. Both teams played their part in delivering a thoroughly entertaining match.

Dan Grinrod opened the scoring for Walden in the first half with a well timed run to power header the Bloods ahead. this was nothing more than they deserved as much of the play was in the Haverhill half. In truth, with a little bit more patience or decisiveness in front of goal, Walden should have gone into the break 3 goals to the good.

Haverhill came into the game more in the second half and dominated the game in spells throughout. However, everytime Walden regained possession their were quick to turn things around and make yet more goal scoring opportunities for the front 2.

Skipper Coby Game was in fine form and was a constant threat down the right hand side. On the opposite side of the pitch, Ronnie Ledwith was running at the Haverhills back line at every opportunity. These runs were complemented by the intelligent positioning and distribution of a very well disciplined midfield of Mason Naylor, Charlie Davies and Pedro Da Silva.

The 5 subs all took their place in the 11 and the changes were seamless. Joe Brown, Charlie Dicker, Jack Garrett, Liam Moir and Kieran Lock all delivering fine displays when called upon.

It was a late night.... But a good night. Hopefully the First team will go one better this Friday and take all 3 Points.