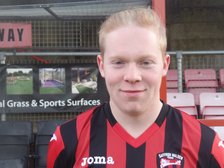 Following the overnight rain, the pitch was deemed fit to play and it looked in pretty good shape thanks once again to the work of the groundsman.
Bloods despite having most of the first half possession were finding it diffulcult to find their usual fluent game and struggled at times to make the most of the opportunities that were given them.
Despite this, James Cranes relentless running forced a defender to try to clear the ball from a dangerous situation in the Witham Towns box. The defender could only force the ball into his own goal to put the bloods one up.

On 40 minutes, Pedro Da Silva was adjudged to have bought down the tricky Witham Striker and was somewhat harshly given a straight red putting the bloods down to 10 men.

As is often the case, this spurred the bloods into life and they looked much more likely to add to their tally.

The introduction of a Charlie Dicker, Sac Hassan and Tom Pluck gave a more threatening approach to the bloods attack and they will regret missing the chances which came there way.

A Witham goal midway through the second half and a much later winner, took the wind out of the Bloods sails, but they will once again be positive about their much improved disciplined second half performance.