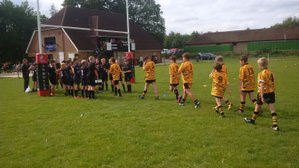 Our first visit as a team to Andover and our first outing as Tadley Tigers U13 was a tough one, though probably less so than the score-line suggests.

As this was both teams first match of the year, and given that our hosts had enough players to field two teams it was agreed that we would play the game as three sessions as this would ease the substitution process. The game was based on the New Rules of Play (as yet unpublished by the RFU) so we fielded 5 forward positions and 7 backs; we also used this first outing to give the players an opportunity to play in different positions to see assess how they may have developed since last season and how they could best support the team.

In the first session, Andover ran in a couple of early tries, making use of overlaps and several missed tackles as the Tigers struggled to find their rhythm and cope with the larger pitch. With a couple of substitutions we saw some improvement in both the tackling and presence at the breakdown.
As the game continued, the Tigers started to dominate in the breakdown though failed to capitalise significantly from it as Andover continued to pull ahead, finding space and slipping past our backs with some great running and passing to put in more tries. The lead could have been greater had our first timer, Connor not showed his pace and willingness to tackle.
As the third and final session got under way the team made full use of their forwards, driving the game forward and finally put one across the line after a concerted effort by the forwards and a great pick up by Ben to draw in the opposition making space for Alex to run up the wing and over the try line. James was unlucky not to get on the score sheet after the Tigers once again used their strength on the 10 metre line a short while later. Andover made a couple more runs past a now fairly exhausted Tigers before the final whistle was called on a very enjoyable and hard fought game.

The boys gave their all, and despite the kind offer of substitutes from our hosts the team happily went into the red to keep the Tigers on the pitch as a team and make the most of the opportunity of their first game. Well done lads.

The game has certainly given us areas to focus on before our next outing, but we can also take away some positives in how the forwards can be brought into the game and how some of the players are clearly growing in their capability and drive.

Man of the Match for Tadley Tigers was Connor.