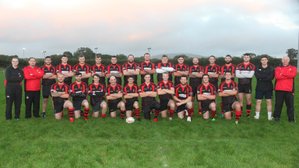 On a glorious day Tavistock welcomed struggling Topsham to Sandy park, but not before much confusion and delay due to a crash on the M5. The game was scheduled to have a transfer referee from Liverpool who unfortunately could not make it on time due to delays. DRRS referee Kirk Lewandowski stepped in and with agreement made between coaches the game went ahead as a league fixture all be it 45 minutes late.

Tavistock got out of the blocks flying; playing in a relaxed manner they were quickly on the scoreboard through the versatile Kyle Maslen who had a clear gallop to the line from 20 metres. George Hillson adding the extras. Moments later it was the turn of first year colt Jack Easton who found himself on the end of a well worked backs move in midfield to score his first senior try. Topsham did hit back when their busy no.8 went over from 10 yards but the score was cancelled out when Maslen doubled his tally on the left wing.

Both teams continued to play exciting rugby and grabbed a couple more scores a piece before half time. George Hillson, another colt making the step up scored before the break moments after Tom friend was sent to the bin for a high tackle.

The second half started nervously, with both teams in the game but after sustained pressure from Topsham on Tavistock's line, the home side had too much out wide for the guests. Martin Budden playing like an 8th back was busy all game and made regular line breaks from first phase. When he linked with the centres Andrew Smerdon and Ben Hadfield there was little stopping them. Hillson however was the man of the moment, a second half hat trick to add to his first senior try in the first half sealed the 5 points for the Moorlanders.

There is no game this weekend. The club will play its final two fixtures the weekend after when the 1st XV travel to Honiton and the 2nd XV play Plymouth University at home.