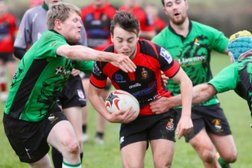 Biggest win of the season by a mile

Tavistock welcomed Hayle to Sandy Park on the back pitch due to the poor weather conditions! Despite this the rain held off and spectators were subject to some fine rugby and result to follow.
The opening period was perhaps the Moorlanders best in recent years with the try bonus point being sealed in the first half hour.
It was josh birch who opened the scoring when good inroads from captain Andrew Schuttkacker and centre Andrew Craddock led to Hayle short of numbers in defence and an easy run in for bitch to finish. Edward Nettleship converting.
The second score of the game was of different contrast when a well set driving maul was finished off by Jasper Cameron who had another simple dot down!
Craddock ran and excellent line off Jamie legg who produced a fantastic offload to score the home sides thirs before Australian Hamish Dawson scored the try of the season with a dainty chip and chase from half way to seal the bonus point.
Leion Cole finished the half with a mirrored try of Craddock’s previous efforts to bring the half time score to 33-0 against the slope. Nettleship converting 4/5 of his efforts.
The second half saw an improved Hayle performance and they were rewarded with an early score. Almost immediately after however the home side struck back when Ethan Lamerton bundled over from close range.
There was a period of good defence from Hayle but a length of the field interception and well worked try in midfield saw a late comeback from the Cornish guests.
Sam Northmore continued to spoil the visitors comeback with some excellent defence work leading to his man of the match performance.
Tavistock got the final word when an uncharacteristic turn over from substitute Jack Jones saw an excellent clearance from Dawson turned over deep in the Hayle 22, a good set of phases saw loanee Ben Tharme cross in the corner for his debut try for the club!
Next week the 1st XV are away to high flyers honiton 2.30pm
Share via
FacebookTwitter
https://www.pitchero.com/clubs
Recent news