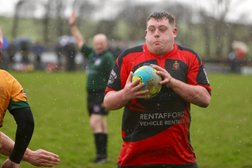 Tavistock built on last weeks impressive defensive display against Plymouth Arguam with a mighty show of forward domi- nance that brought high flying Plymstock down to earth with a bump.
Playing into a strong wind in the first half the Moorlanders started slowly and slipped to a 10 point deficit inside the first quarter. Tavi kept their composure, however, and played to their strengths.
The forwards kept the ball tight and rumbled their way forward to the Plymstock line. Hammy Kerswill and Andrew Schuttkacker both made yards before prop Charlie Charlton powered over for the home sides first try. Andrew Craddock added the tricky conversion.
Tavistock continued to defend stoutly until the end of the half and managed to keep their opponents from scoring even when they had a man in the sin bin.
Plymstock’s scrum had started to creak in the first half and when they failed to make the ten metre line with the second half kick-off Tavistock were quick to capitalise on an obvious advantage.
The front five of Charlie Charlton, Hammy Kerswill, Joe Hair, Leion Cole and Seb Cox tore their op- ponents to shreds and shunted the former league leaders around at will, probably earning 8 to 10 scrum penalties during the course of the game. As the half progressed scrum half Hamish Dawson started to take control and utilise his hard run- ning back row of Jamie Legg, Doug Morgan-Thomas and Andrew Schuttkacker.
Dawson also started to employ more kicks out of hand and one of these found acres of space on the right hand side.
Playing in the unfamiliar role of winger, flanker Hallam Bourton showed a great turn of pace to chase the kick and beat his opposing wing and fullback to touch down in the corner.
Plymstock looked to respond by running the ball from deep but it was not the weather for expansive rugby and when their handling let them down they were made to pay at scrum time conceding further penalties. This eventually result- ed in the referee losing his patience and he dispatched the away sides hooker to the sin bin.
A five metre scrum shortly followed to the Moorlander's and a further penalty was awarded when the Plymstock scrum collapsed. Dawson took a quick tap and dived over to score, although he might have risked the wrath of his forwards if he had failed with the touch down. Craddock again kicked confidently and added the extra 2 points moving Tavi to an important 2 score lead.
Despite a few unavailability’s and injuries Tavistock were able to field a strong bench and both Jack Lewis and Tom ‘Chaz’ Charlesworth made line breaks when they came on. Ash Martin also came on into the front row and made sure the scrum pressure kept going until the end of the game.
As the game moved into the last quarter Tavistock showed that they could play in the wider channels and a break down the left from centre Louis Cockcroft saw him put Charlesworth into space. Chaz looked to have timed his pass perfectly to winger Ash Toll who raced into the left hand corner. Unfortunately the referee saw the pass differently to the Sandy Park faithful and he adjudged it to be forward, denying the Moorlanders what would have been a well-deserved try bonus point score.
Nevertheless, the increasingly impressive red and black defence held strong and Tavi player coach Hammy Kerswill secured a turnover at the last play of the game to win the penalty and ensure The Moorlander’s a famous home victory.
Share via
FacebookTwitter
https://www.pitchero.com/clubs
Recent news