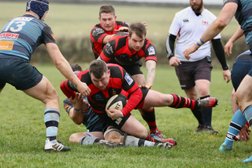 Sixth league victory in a row

Tavistock glow from the ‘Reyburn Effect’

The James Reyburn effect is really taking hold at Tavistock with James and his coaching team of Hammy Kerswill and Darren Chappell recording their sixth league victory in a row.
With 4 or 5 first team regulars unavailable the Moorlanders’ showed that they had some strength in depth with this gutsy performance against a team that they had lost heavily to in the reverse fixture before Christmas.
Things looked a bit ominous at the start for the home side when Topsham’s free flowing backline moved the ball wide and scored the opening try in the right-hand corner.
Tavistock showed some strong character and came back with some powerful forward drives from Hammy Kerswill and Andrew Schuttkacker getting them on the front foot.
After pressing the Topsham line and going through a number of phases prop Charlie Charlton got the break through and bundled over from close range. Robert Pratt nailed the tricky conversion to give the Moorlanders’ a 2-point lead.
Topsham were soon back on the offensive and their scrum was much improved from the sides previous meeting. Again, moving the ball wide, they went over in the corner but could not convert.
Tavistock started to utilise their own backline and half backs Jack Glover and Ethan Lamerton both made breaks but were unable to find any support runners.
The Moorlanders were getting a few phases of play together and after the forwards had tied up some defenders centres Robert Pratt and Louis Cockcroft found space for winger Ash Toll, who with a nifty goose step rounded his opposite wing and raced over to give Tavi a 12-10 lead at half time.
Tavistock started the second half like they meant business and second row Seb Cox was at the forefront of this with a hugely impressive work rate at the breakdown and a number of storming line breaks.
Backrowers Leion Cole and Hallam Bourton were also a persistent nuisance at the ruck and mauls, spoiling Topsham’s possession wherever they could. Having pushed for their third try for the halves first 20 minutes Glover fed Lamerton and he stepped inside a front rower to find space for Cockcroft who put winger Connor Packwood over in the right-hand corner.
This score was a just reward for Packwood who was playing for the first time in a first team fixture having only started playing rugby this season.
For the remainder of the game Tavistock had to batten down the hatches and demonstrated their new found resolve with a fierceam defence display.
Louis Cockcroft put in one of his now trade mark bone shuddering hits on his opposite centre and the Tavistock back 3 of Sam Eaton, Connor Packwood and Ash Toll all made timely tackles. As the game entered its final few minutes Topsham were camped on the Tavistock line and looking threatening when Jack Glover made a crunching tackle on his opposite scrumhalf and drew a penalty.
This enabled Tavi to clear their lines and after securing the resulting lineout and kicking into touch the game ended.
Share via
FacebookTwitter
https://www.pitchero.com/clubs
Recent news