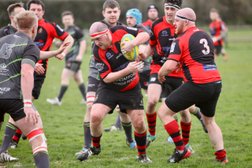 TAVISTOCK got back to winning ways but are still searching for the complete 80 minute performance.
A series of forward drives from the Cornish side saw them suck in defenders and create space for their first try in the right hand corner. Tavistock responded sharply and looked to move the ball to the wider channels. After attacking down the right flank they moved to the left and a deft floated pass from second row Leion Cole saw him find winger Sam Eaton, who crashed over to open Tavistock’s account.
Leion Cole saw an opening and needed no second invitation to barge over for Tavi’s second try, which Rob Pratt converted. Tavistock were really in the ascendency and some good handling from Ethan Lamerton and Louis Cockroft made space for Andrew Craddock to score in the right hand corner, just as the first half ended.
At the start of the second half Tavistock looked lethargic and they started to drop off some tackles, which let Lanner back into the game. Their winger broke through and scored under the posts, which was duly converted. Lanner were now on the front foot and from a line-out ball a loose tap back by Tavistock enabled a Lanner backrower to dive over for an easy score.
Rob Pratt slotted the kick to give Tavistock a one point lead with 10 minutes to go. With Lanner losing two players to the sin bin for persistent infringements they seized the initiative and from a tap penalty saw Schuttkacker finish the game in style, giving the Moorlanders a well-earned bonus point win. Pratt added the conversion to deny Lanner a losing bonus point.
Share via
FacebookTwitter
https://www.pitchero.com/clubs
Recent news