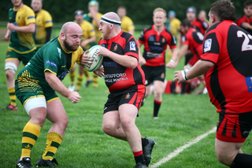 The match was a fitting tribute to Ex Tavistock and Plymstock player Carl Parsons.
The game was played in honour of Carl, as it was the first time the two clubs had met since his sad passing last year and was marked with a minutes applause followed by a minutes silence, prior to kick off.
Plymstock started much the brighter and after a well jackalled turnover the ball was moved to their Fly half. He executed a deft crossfield kick to his right winger, who caught the ball and raced clear down his flank to score under the posts. The conversion took the visitors to a 7 nil lead.
Shortly after more turnover ball saw the Oaks move the ball slickly across their backline to the left wing and he rounded his opponent to score. With 7 or 8 regular first teamers unavailable it looked like a long afternoon lay ahead for the Moorlanders’ and their supporters. Fortunately, the scrum has been a real strength for Tavi and keeping the ball tight was a good source of penalties. One of these was kicked by the Tavi Fly Half Rhys Davies to open Tavi’s account.
The front row trio of Josh O Neill, Hammy Kerswill and Joe Hair were in the ascendency and persistent scrum infringement saw the home team awarded a penalty try, making the score 10 to 12 at half time.
Injuries to a couple of key Oaks players saw them lose momentum and despite large amounts of possession inside the Tavistock half they were unable to convert opportunities.
The Moorlanders’ started to have some breakdown success with Tavistock Legend Duncan Law rolling back the years and securing vital turnover penalties.
While the visitor’s backline still looked dangerous, they struggled for set piece possession. Law was again prominent latching on to lose lineout balls and driving the Moorlanders’ forward.
A midfield scrum saw number 8 Martin Budden show a great turn of pace from the base. He looked like he was going to go all the way before showing the composure to draw the fullback and pass to winger Connor Packwood. He grasped the tricky ball and raced clear scoring under the posts, much to the delight of the Sandy Park faithful. Half backs PJ Wilcox and Rhys Davies worked hard to keep the home side moving forward, with forwards Seb Cox, Charlie Brown and Richard Cann carrying hard.
Centre Alex Lewandowski showed his classy footwork to help Tavi keep impetus as they went into the last quarter. Playing in the unfamiliar role of fullback Rob Pratt was an effective last line of defence bundling Plymstock players into touch.
Centre Andrew Craddock tackled strongly all afternoon and showed great awareness to kick through a loose ball. He won the footrace against the Plymstock fullback and dived on the ball to secure possession five metres before the line.
The forwards covered good ground to recycle the ball quickly before Wilcox put left wing Sean Donnelly clear to score Tavi’s third.
The Moorlanders’ were now on the hunt for a try bonus point and the crowd weren’t disappointed when the home side drove their opposition over from a five metre scrum. Captain Martin Budden dotted down and Davies added the conversion to secure the win.
Next Saturday Tavistock make the short trip to Saltash and would welcome all travelling support.
Share via
FacebookTwitter
https://www.pitchero.com/clubs
Recent news