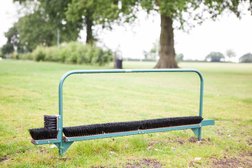 Kingsbridge have not found the going easy since gaining promotion last season, and this defeat leaves them 20 points from safety. They can take some solace from the fact that Teignmouth were similarly placed this time last year, but now find themselves mid-table and confident of retaining their Level 6 status for another year.

Conditions in the South Hams were certainly not conducive to running, passing rugby, but both sides made a huge effort to produce an entertaining, if error-strewn, match, and to their credit managed a total of six tries.

The Kings certainly looked prepared for a proper battle in the first quarter of an hour, completely dominating possession and territory, and were finally rewarded when James Palmer broke through the visitors' defence to put scrum-half George Jones in under the posts, and Ben Newman converted.

This finally shook Teignmouth from their stupor, and they took control for the remainder of the half. First player-coach Colin Aldworth powered over from a lineout, then centre Matt Laventure burst through a succession of attempted tackles to put the visitors in the lead. With Dan Force's place kicking having regained its mojo of late, he added the two conversions. Finally Henry Raby scored in the corner for the second week running to give the Teigns a 19-7 half-time lead.

Coach Marc Dibble did a little reorganising at half-time which wasn't entirely successful, especially when both Rob Parsons and Faolan Lidstone had to retire injured. Consequently Kingsbridge came back into the match with a Newman penalty and a James Trout try.

But Teignmouth tied up the bonus point victory when Arron Kelly barged over with eight minutes remaining and Force added his third conversion of the afternoon.

Dibble heaped praise on his side for their resilience in the face of determined opponents and awful conditions and at the halfway point of the season saw every reason to look forward to the return fixtures with some confidence.

The first of these is a home encounter with third-placed Clevedon this Saturday. Kick-off is at 2.30 pm.