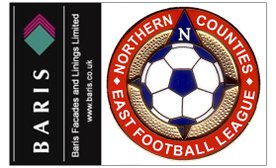 Two Baris NCEL sides are through to the last 32 of the FA Carlsberg Vase after comfortable wins on Saturday.

AFC Emley progressed thanks to a 3-1 victory at Barnoldswick Town whilst Brighouse Town join them in the Fourth Round after they dispatched Holbrook Sports, 4-1, at the Dual Seal Stadium.

A brace from Ashley Flynn helped Emley to the win at their North West Counties League Premier Division hosts whilst Doran Jordan made sure of the victory with their third with ten minutes remaining.

The league's top scorer, Tom Matthews, scored twice for Brighouse whilst Ryan Hall and Danny Nadiole also found the net in their game but they had a local electrician to thank the most for their victory.

They were seemingly on their way to the next round when the floodlights covering a quarter of the pitch went out midway through the second period.

But Will Cahill saved the day, coming from his home to fix the problem, and the game was finished when it looked as though it may have to be played again.

Long Eaton United and Thackley, meanwhile, bowed out of the competition with a 2-1 defeat at Rocester and a 4-2 loss at home to Wisbech Town, respectively.

The leading two sides in the Premier Division extended their advantage at the top of the table with victories.

Nathan Cook and Josh Greening both struck twice for Bridlington Town as they overcame hosts Heanor Town, 5-3, but things were a lot simpler for Scarborough Athletic whose 6-0 victory at home to fellow title chasers Worksop Parramore kept them two points behind the Seasiders.

The Seadogs had six different goalscorers, all in the second half, as Denny Ingram, Oliver Banks, Ryan Blott, Peter Davison, Matthew Plummer and David Brown made it four league wins in a row for Rudy Funk's side.

A Steve Norton hat-trick helped Barton Town Old Boys to a 6-1 home win over Armthorpe Welfare to move up into fifth spot.

They go above Staveley Miners Welfare, who were held to a 2-2 draw by visitors Retford United with Adam Scott's double getting a point for the Badgers, and Tadcaster Albion, who went down 3-1 at Pickering Town.

Ryan Williams scored their goal but that was only after Liam Salt had netted twice and Joe Danby had also got on the scoresheet for the Pikes.

Nostell Miners Welfare have moved out of the bottom two after a 3-1 home win over Winterton Rangers, with their opponents replacing them in 21st spot.

And, Maltby Main picked up their second victory on their travels as they defeated Hall Road Rangers, 3-2.

Despite a double from Jack Briscoe, with a goal at each end of the game, Division One leaders Athersley Recreation have seen their gap at the top reduced to four points as they drew 2-2 at Hemsworth Miners Welfare.

Second-placed Albion Sports took advantage, winning 3-1 at Pontefract Collieries with second half goals from Graeme Sides and Kayden Jackson after the game was all square at the interval.

Cleethorpes Town stay third but have lost a little ground after they were beaten 3-2 at Shirebrook Town who move up into seventh spot.

There were 2-2 draws for Dinnington Town at home to Rossington Main and for Knaresborough Town at Worsbrough Bridge Athletic.

And, Selby Town, whose home game with Bottesford Town was one of five matches called off, are now nine points adrift at the bottom of the table after Appleby Frodingham's 3-2 home victory over Eccleshill United.

The other four postponed matches were Parkgate's trip to Shildon in the FA Vase and, in Division One, Hallam at home to Clipstone Welfare, Louth Town versus Askern Villa and Teversal's match at Yorkshire Amateur.