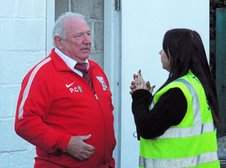 CLUB CHAIRMAN TO STEP DOWN

Teversal FC chairman Pete Cockerill is stepping down after 8 years at the helm.

Pete, has been involved with the club since 1995 in various roles before taking the reins as Chairman since 2011, presiding over many changes and the growth of the club that is now in a strong position for the commencement of their 101st season.

On the pitch he has seen many ups and downs, including keeping the club at Step 6 of the National League System and even gaining qualification back into the Emirates FA Cup last season.

His longevity at the club started when his son Gary started playing for Teversal under 18's. From that day, Pete has also watched his other two sons, Colin and David, play for the club for a number of years with his grandchildren also now playing in the youth section. Pete said "This has been an incredibly difficult decision to make, but because of personal reasons I will by stepping down as chairman with immediate effect. I feel the time is right for me to step aside and give someone else the opportunity to take the club forward from here".

"The Club will always remain incredibly special to me, and by continuing as a Director I will still support the new Chairman. I would like to thank my wife Vicky for supporting me for all these years, my immediate family who have supported me and all the people who been part of the clubs journey with me. Thank you to my fellow directors and club volunteers who have always supported me through thick and thin."

Teversal FC Vice-Chairman Chris Slack said "It has been great working with Pete over the years and everything he has done for the club is hugely appreciated by not only me, but everyone else at the football club. He has created a legacy at the club that many will never forget and I’m sure he will want to support the new appointed chairman anyway he can".

Teversal FC football Secretary Kev Newton said "Our club is built on hard-work of volunteers, with Pete being our shining light leading the way. The legacy he leaves goes without saying, he changed the status of the club, overseen the club becoming a Charter Standard Club and grown to have teams all through the ages, whilst seeing the introduction of the Ladies Team and now the start of a girls youth set up by becoming involved with FA led initiative Teversal FC SSE Wildcats. He has laid the foundations hopefully for his successor to build on for another 100 years. I’m sure he will continue to be supportive to us all, so, Thank You Pete for all you have done for me and all at the club".

In the interim period, Vice-chairman Chris Slack will become acting Chairman, whilst the Directors go through the recruitment process to find a new Chairperson. If you would like to find out more about the role and possibly be considered for the post, please contact Chris Slack by email at christopher.slack3@ntlworld.com

Thank you Pete from EVERYONE AT THE CLUB