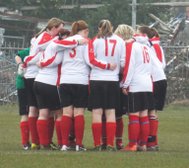 The Annual General Meeting for the Ladies League took place on Monday evening, and the constitution of the Leagues were announced.

The line up for Division One North was announced and it will contain twelve teams and is as follows...

Gedling Town (relegated) and Sandiacre Town (due to re-structuring) have come down from the Premier Division, whilst Lincoln Griffin (from Lincs County Women's League) and Ollerton Town (from Notts Girls & Ladies League) have been promoted into the League.

The season is due to commence on 12th August with a midweek fixture (if clubs are willing to play), with the first Sunday games a few days later.