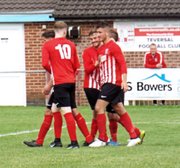 A pleasant summer’s afternoon greeted the new East Midlands Counties League campaign at Carnarvon Street as Teversal entertained Gedling Miners Welfare after their lateral movement from the Toolstation Northern Counties East League Division One. Gedling arrived with a new management team and the hope and aspirations a new season brings.

The game started brightly with Teversal having the early possession without creating any real opportunities. Gedling started to grow into the game but should have gone behind when an excellent passing move saw Matt Wilkinson cross an inch perfect ball across the six yard box that Sean Dickinson guided past Heltorp but also wide of the mark.

A period of heated exchanges saw James McCann for Teversal and Smith for Gedling picking up yellow cards for some overzealous challenges. Gedling produce a foray down the right flank with Clarson delivering a far post cross that saw the home defence stand up to the test as the calmly dealt with the threat.

Teversal took a well-deserved lead on 30 minutes when Kurt Bamford raced in behind the visitors defensive high line to break into the penalty area with the ball dropping Crisp put in a last ditch challenge that brought the Tevie man down with the referee having no hesitance in pointing to the penalty spot. Josh Radford stepped up to calmly fire home despite Heltorp's valiant effort to deny the striker.

The home side regained the initiative and with half time approaching, Gedling conceded a free kick out on the Teversal right. Kurt Bamford stepped up to drill a low free kick that was helped on by Khyle Sargent to the far post where Josh Radford was on hand to guide the ball into the back of the net with aplomb on 43 minutes.

At half time Gedling shook things up by introducing Fisher and Hawkins for Crisp and Payne. The changes looked to have paid off with the visitors starting at a higher tempo asking more questions of the home side. Ryan Plummer became more involved in the game and became a real threat, but Sam Lavelle and Tom Laister remained solid at the heart of the Teversal defence, laying the foundations for a more workmanlike performance in the second period for the home side. This made for a good entertaining game with efforts on goal becoming more of a premium and when the opportunities came both keepers dealt with the efforts with an air of confidence.

Overall both sides will leave the game with optimism, Teversal with the win, a clean sheet and looking to maintain the attractive football that is a pleasure to watch. Gedling are starting a new chapter under their new Management Team who will have seen enough to be positive and optimistic of a good season ahead.

Next up for Teversal is an away trip to face Ashby Ivanhoe in the East Midlands Counties League Premier Division on Saturday 5th August 2017 with a 3:00pm kick off.