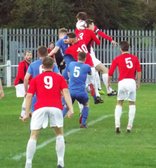 This was close fought game between two fairly even sides, with the host having the benefit of playing down the Stag Ground slope. In the early exchanges Jake Allen had to make a timely tackle to deny Campbell with the loose ball running through to Green to fire a low effort that was saved by Gareth Briggs who had rushed off of his line quickly to make himself big and save with legs. Unfortunately for Kimberley, Campbell picked up a knock in the challenge and was unable to shake it off before being subbed just before the quarter of an hour mark.

First half hour turned to an end to end affair with little goalmouth action at either end. Then in the final 15 opportunities did come. For Teversal, Matt Wilkinson had a headed effort that didn't trouble the home Keeper, Declan Jenkins then fired effort slightly wide when latching onto Matt Wilkinson’s chest back to the midfielder. Then Danny Fullwood had a drive that forced a routine save by Kinnerley. In response Kimberley main threats came from set pieces and corners, but the Tevie rearguard held firm that ensured the game went into the break goalless.
Playing down the slope Teversal came out making a bright start saw Danny Fletcher creating the time and space to unleash a powerful effort that the impressive Adam Morley blocking. Kimberley showed they wasn’t to sit back with Pearson advancing up the right flank before cutting in produce an inch perfect and weighted pass to pick out a Green who had the time and space to fire effort on the corner that clipped the angle of bar and post on its way to producing a goal kick.

Within in minutes of the restart, the visitors had the best of the chances on the night when Matt Wilkinson headed a pass into the path of Ben Cartwright to release Danny Fletcher, the Tevie marksman raised clear with Kinnerley raising off his line to narrow the angle with Danny Fletcher guiding the ball past the advancing keeper but also wide of the far post.

The cost of those mischances was known on 67 minutes when another strong run by Pearson again saw pick out Sean Green who this time shown the composure to finish with aplomb leaving Gareth Briggs with no chance as ball went in the goal across the Keeper and in at the foot of the post to give the host the advantage.

Green was denied a second goal when well taken free saw Gareth Briggs called into to action again making an excellent save by pushing the goal bound effort wide of the goal. The game went into a frantic last 15 minutes as the visitors went searching for the equaliser, but the best opportunity came Pearson’s way who was denied by the Tevie keeper, who was quick off his line to save at the corner of the 18 yard box.

Teversal left the Stag ground feeling they deserved a minimum of a share of the spoils, with Kimberley feeling they had done enough to take the three points.