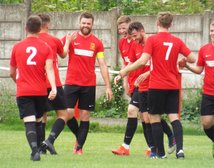 All the pre-season hopes and aspirations ended and the reality of competition started with some significant changes to the laws of the games, with a big introduction of the “Sin Bin” at the Step 5 and below levels of the National League System ...

...for dissent. Thankfully due to good spirited game well officiated, we didn’t see the use of the Sin Bin in an encounter that really did have the opening day feel to it, with both sides good value for their share of the spoils, but for different reasons.

The game started with both sides playing the ball around looking to unlock what looked like solid rear guards at both ends of the park.

Teversal had the best of the initial exchanges and was rewarded on 12 minutes, when their first corner was delivered deep into the Hucknall penalty to be headed clear to the edge of the penalty were the home skipper Pride picked up the ball before attacking the penalty area to drill a low cross for Matty Wilkinson to fire into the roof of the net to open his and the host account for the season.

Hucknall wasn’t fazed by the set back, settling in the game and becoming more of threat with the striker Brian looking a true threat and produced their first effort of note when he looked to seize on a precise through ball that draw Rio Alberry off his line to save at the feet of the striker.

On 19 minutes, Hucknall’s efforts saw them claim polarity when Brian's was again central in the move when he became the supplier of an excellent weighted pass in behind the home defence to pick out the timely run of Sam Sims who finished with aplomb past the advancing Alberry to level the scores.

Hucknall’s high press became more intense which to Colton losing out in midfield to Ashurst who immediately played the ball into the path of Jack Smith who forced Tevie Keeper Alberry to make an excellent save at full length to guide the effort over the bar.

Even though the visitors were now having a large share of the possession that saw Hucknall maintain a period of pressure, which led to Ashurst picking a clearance up 20 yards from goal before firing an effort just wide of the mark. As much as Hucknall was having the position, the Tevie defence more than stood firm keeping the visitors to efforts from distance or delivering crosses that Alberry dealt with admirably to see the scores remain level at the break at 1-1.

Unfortunately for Teversal they was forced into making changes due to injuries with the first coming at half time when Danny Fullwood was replaced by Miles Thirnwell and became a pest to the Hucknall defence when he immediately latched on to a ball from Pride to attack the penalty area to fire past keeper Adam Jablonski only to see Phillips race back to clear off the line. Thirnwell later had to be replaced after picking up.

As in the first half, after having the better of the early exchanges the host surrendered the majority of the possession to Hucknall. But also like in the first period, the defensive qualities were a match to the advances of their guest.

The best of the chances for the visitors came when Crawford delivered an inch perfect free kick to invite Brian to powerfully head, but without direction, with the effort going wide of the mark. Crawford was the benefactor of a rare defensive lapse when a lapse between Payling and Alberry allowed Crawford nip in between them to guide the effort over bar.
Therefore, as much as Hucknall had continued to dominate the possession, the host defending efforts by all in a red shirt deserved their share of the spoils in an entertaining game.

Next up for the Tevie Boys is a trip to face Gedling Miners Welfare on Saturday 10th August 2019 with a 3pm kick off at Plains Road.