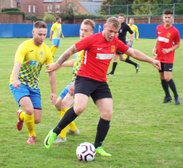 “Away Day Joy For Tevie”

A mixture of the Spring, Autumn and Summer hit Plains Road for the East Midlands Counties East League fixture between Gedling and Teversal.....

…... Not only was there a contrast in the weather, but the styles of the two sides looking to maintain an undefeated start to the season.

It was Teversal who attacked with the wind in their faces, settling into the game to take control of the game forcing a couple of corners that the host defended with ease. Gedling's approach was a little more direct and with the wind behind their backs, far too many long balls ran through to Alberry in the Teversal goal or for a goal kick. Therefore, the initial effort on goal came from the more creative Teversal, when Mallinder played into Wilkinson who drilled an effort that Sharpe in the home goal made a routine save to keep the Gedling goal in secured.

Efforts were at a premium in the opening exchanges, but at the mid-point of the half a free kick from Luke Smith deep in the Tevie penalty saw Corrigan and Spiers get in each other’s way as the ball went through for a goal kick. Like buses, both keepers were called into action, Teversal created an opening when Wilkinson picked out Fullwood’s timely run with Sharpe quick off his line to block. Then at the other end Jimmy Spiers had a similar opportunity with the time and space to test Alberry, who stood up admirable to the test.

The game had now balanced out, when another free kick for the host saw Smith deliver to the far post where Corrigan failed to make contact, then a fierce strike by Large forced a save from Alberry. The purple patch from the host was halted on 30 minutes, when Teversal took a deserved lead when Wilkinson played a through ball that sent Fullwood clear under pressure from Corrigan and Thurgood to clinically finish past the advancing Sharpe.

Teversal controlled the proceedings keeping possession looking for the opening to double their lead, but the best opportunity came Gedling’s way in the dying stages of the half when an excellent passing saw them advance down the right flank with McCaughey playing an inch perfect ball through to Large who was held up by some excellent defending by Lavelle.

The second period saw Gedling coming out to control the possession, but the shape and discipline of the visitors rear-guard was a tough nut to break, with the host becoming visibly frustrated by not being able to create a clear opening to create the opportunity to level and forced to fire efforts from distance without threatening the Tevie goal.

A McCaughley free kick found Spiers whose effort saw a timely block by Lavelle. The resulting corning was hit long with the Tevie defence again defending their lines well to clear the danger. Then Thurgood delivered an excellent free kick that picked out Harrison to powerfully head over the bar.

One of the best openings came when Corrigan delivered a cross that eluded Alberry to find Large who headed back across goal with Bartle clearing off the line. In the dying minutes, Thurgood delivered a corner that caused a scramble in the penalty area with Large turning on the edge of the six-yard box to hit the bar with only 3 minutes of normal time left.

In response to Gedling’s advances, Teversal looked a threat on the break, but the key feature of this excellent win was their defensive discipline, shape and true guts were enough to dispel the threat and frustrate the host, who simple couldn’t break down the resilience of the Tevie Boys.

The host clearly felt they deserved a win, but that would be doing a disservice to the Teversal side who was superb in every department with every player doing the task they needed to bring the three points back to the SR Timber Arena.

Now the Tevie Boys prepare to entertain Clifton All Whites on Saturday 17th August 2019 with a 3:00pm kick off at the SR Timber Arena.