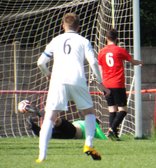 The game had a bright start to proceedings to closely contested encounter with the weather conditions best described as autumnal with the wind blowing across sun drenched SR Timber Arena...

... A tightly fought contest saw the Tevie Boys have the better of the first period and Clifton the second half with the draw a fair result after the entertaining 90 minutes.

The opening minutes saw the game toing and throwing, with it being the visitors who went closest in the first 45 minutes with the first effort of the game. Ben Clark was fouled 25 yards from goal with the Clifton number 10 picking himself up to fire an effort that smashed against the angle of bar and post with Alberry left stranded in the Teversal goal. That was followed at the other end, when Wilkinson was fouled by Kenworthy in a similar position, with Danny O'Donnell electing to fire an effort that was less fierce than Clark's, but it did bring a save from Kirk, who elected to parry the effort to safety whilst diving to his right.

Teversal were controlling proceedings, but as in previous weeks chances were coming at a premium, but it was the host who created some half chances for Fullwood and Wilkinson, but the visitors back line managed to get blocks in to protect Kirk in their goal, with Kenworthy marshalling his defensive partners superbly. One of the best advances by the Tevie Boys saw a passing move down the right when Wilkinson sent Fullwood on a run to cut in from the side line to fire a low effort that Kirk saved low to his left but at to gather at the second time to deny Joel Smith who was looking to poach any opportunity.

Clifton wasn’t to be denied and always looked a threat on the break with Clark being a talisman for the visitors. It was the striker who had the final effort of the first period when he held off challenges from Griffiths and Lavelle to unleash a fierce drive from 18 yards that was just wide of the target, smashing against the rear net support.

The host had the better of the first period, the second period saw a reverse in the pattern of play with Clifton becoming the attacking force with the Tevie back line showing their qualities, along with Keeper Alberry who was brought into action when Clark played an inch perfect ball into the path of Seaton, but Alberry was alert racing quickly of his line to save with his legs as Seaton looked to open the scoring. Minutes later, that was followed by Lavelle producing an excellent block to deny Clark during a scramble in the Teversal 18-yard box.
Charlesworth shown some excellent feet, before picking out Reid who miskicked an effort from distance that invitingly fell to Seaton who looked offside before wasting an excellent opportunity.

Teversal had have advances themselves when the impressive Bartle intercepted a misplaced Clifton pass to surge forward to produce an intense attack with some excellent movement and passing leading to O'Donnell striking a stunning effort that beat Kirk all ends up, but the effort smashed against the bar.

On 69 minutes the deadlock was broken when Clifton took the lead, the visitors were putting the host under pressure and when Jake Allen clearance fell to Jordan Smith who drove down their left flank before delivering the inch perfect ball across the 18 yard box that the visitors had overloaded with the cross finding Sam Leggitt to smash home past the stranded Alberry.

Teversal went on the search for an equaliser with Pride spreading ball out to Bacon to deliver an excellent cross that Fullwood headed goalward, but straight into the grasp of Kirk. Fullwood then played an excellent through ball into Allen who was denied by Kirk who got lucky with the loose ball as it fell away from the advancing Teversal full back.

As the game entered the dying stages, Clifton could and possible have doubled their lead when Burton delivered a deep free kick that found the impressive Clark who managed to turn Bartle with his first touch to create an opening, but surprisingly the striking failed to show the composure required and fired a powerful aimlessly effort over the bar.

The true cost of that miss was realised with 3 minutes remaining, when the never say die attitude saw the Tevie Boys find a well-deserved equaliser. Danny Fullwood held off Burton to attack the by-line and then cutting into the 18-yard box before pulling back for Pride and then Whitfield having efforts blocked before Fullwood continued his run to produce a text book volley that smashed in the back of the net to make it 1-1.

Overall an entertaining game between two well matched teams that a point apiece was fair reward in game that was well officiated throughout. Both sides now plan for a big Bank Holiday weekend with Teversal seeing Belper United visiting the SR Arena on Saturday 24th August with a 3:00pm kick off. That is followed by a trip to Debdale Park in Mansfield Woodhouse to face one of the favourites for the Championship in Sherwood Colliery on Monday 26th August, also a 3:00pm kick off.