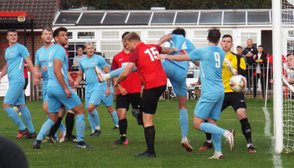 Teversal sent to the foot of the table by Parkgate

With no midweek game and fresh from claiming a point at Swallownest, Teversal hoped to consolidate against mid table Parkgate. With new work experience signing 17 year old Lewis Hill-Smith from Mansfield Town drafted straight into the team in the problem centre back role and new signing Jack Hutchinson back to the club from Shirebrook Town on the bench Teversal were looking to continue the team re building and hope for positive reactions on the pitch.
A slow start to the game for Tevie as Parkgate exposed the defensive frailties with a move down their left drawing Ryan Hancock forward they got in behind Teversal the ball was squared after a neat bit of skill turned Cal Milner and Frederick Tracey side footed home for 0-1 Parkgate. To their credit Tevie responded playing some lovely passing football, Brad Hall with a good effort form 22 yards out which took a deflection to skim past the upright. Parkgate could have doubled their lead in the 13th minute, a ball over the back four again Tracey got their first as he lifted the ball over Michael Ball in the Teversal goal but could only watch as his effort rebounded off the post and safely into Ball hands.
Teversal were rewarded for their efforts in the 22nd minute excellent hold up play by Cameron Pinnick who laid off to Lee Naughton received the ball back before firing just inside the post for his eighth league goal of the season to make it all even at 1-1. The parity didn’t last long as again Parkgate got in behind down Teversal’s right in a carbon copy of the first goal as the ball was squared for the oncoming Sam Ackroyd to side foot home for 1-2 Parkgate. Big blow for Teversal who were having a purple patch in the game but Parkgate upped the anti to re take the lead.
Both teams sparred for the next goal, Tracey blazed over in the 36th minute following a defensive missed header and it wasn’t much after that Parkgate extended the lead as Ackroyd picked up the ball inside his own half a couple of missed tackles later he was 30 yards from goal as he unleashed a powerful effort which moved all over the place and beat Ball’s outstretched fingers to find the net just under the cross bar and 1-3 Parkgate. Five minutes later Parkgate broke Teversal’s resolve again this time a well worked corner their undoing as mass movement to the near post left acres of space for the ball to be dropped to the far post to which Ackroyd made a late run into the space created to volley home superbly and 1-4 Parkgate another lesson for the Tevie boys.
Half Time Teversal 1-4 Parkgate
A change in formation for Teversal at half time to a 4-3-3 in an attempt to tighten the midfield up and it almost got them back in the game in the 47th minute, good build up play down their left Tom Widdowson combined well with Hall and Lee Naughton to set Jak Lightly away his cross to the far post found Pinnick who headed over with Ryan Hancock well placed behind him. In the 50th minute Naughton flicked onto Hall who shot early but narrowly past the upright. Two minutes later Lightly again down the left with a great ball over for Pinnick and Naughton to get in each others way but the ball fell to Widdowson with a shot just wide of the post.
Teversal were well in the game the changes having the right impact on their game but Parkgate had a great chance in the 63rd minute to put the game to bed when Ackroyd burst through the Tevie defence to be one on one with Ball but the keeper pulled off a great save as he closed down the space quickly. Jack Hutchinson replaced Elliott Couldwell in the 66th minute just before Ball pulled off an easy save again from Ackroyd.
Teversal again went close in the 70th minute Naughton winning a free kick which Hutchinson delivered to the far post but Kian Bramley headed wide when well placed. Naughton was replaced by Blake Vincent in the 71st minute. Ackroyd who was proving to be Teversal’s thorn in the side went close again in the 77th minute this time with his head as he directed a cross back across goal but wide of the post. Teversal’s final throw of the dice in the 79th minute when Jake Allen replaced the tiring Pinnick. It was now end to end as Teversal looked to snack something late on Parkgate had an effort from Tom Staniland deflected wide and from the resultant corner Haydn Ward headed over, quickly followed by Hill- Smith grabbing a debut goal for Teversal as Widdowson’s cross was flicked on to find Hill-Smith who finished with aplomb for 2-4. Despite a bombardment on the Parkgate goal in the remaining few minutes Teversal couldn’t claw anything else back and Parkgate took all three points home to Rotherham.
Final Score Teversal 2-4 Parkgate
Share via
FacebookTwitter
https://www.pitchero.com/clubs
Recent news