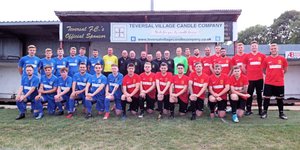 Chances galore to both teams as Teversal edge 6 goal thriller

A number of changes from the team that beat Hilton Harriers, James Hewison started in goal for his first game of the season with Jonathon Clark partnering Greg Smith in centre defence, Gary Atkins moved into the diamond with the returning Ki Smith and new signing Josh Radford started up front alongside Jordan Black.

Within the first seconds of the game Arnold had a great chance to open the scoring when Butler crossed from the right for McLachlan to head goalwards but Hewison was equal to it in the Tevie goal. From his clearance Josh Radford bought a foul by Ryan, Craig Newton put the ball in to find Radford who was inches away from tapping the ball in the net. What a sign of things to come.

Teversal took the lead in the 3rd minute when Atkins played the ball down the right for Radford who controlled well in the box and was bundled straight over from behind and the referee had no hesitation in awarding a penalty. Up stepped Jordan Black only to see his penalty well saved by Walker but with quick reactions Black fired home the rebound and 0-1 Teversal. Arnold poured forward and were having joy down Tevies left and McLachlan headed wide from a cross in the 7th minute. Teversal had to do a lot of defending but did look very dangerous on the counter attack.

Josh Radford came very close to doubling Teversal's lead in the 12th minute when he stepped up to curl a free kick just wide of the post. Teversal were defending stoutly but did have big slices of good fortune as following one of a number of Arnold corners they struck the top of the cross bar in the 16th minute and fired wildly over in the 23rd minute. Two minutes later following a Teversal clearance Brown won the ball well before shooting from distance again just over the bar.

In the 29th minute Hewison pulled off a fantastic one handed save when he tipped the ball over the cross bar as the sequence continued of heavy Arnold pressure only broken up by Teversal occasional raids. It was to be on one of those raids in the 34th minute that Teversal doubled there lead as Atkins passed neatly through to Radford who ran in to finish with ease and 0-2 Teversal. With Tevie putting maximum effort into holding out before half time they picked up two bookings, Jordan Black in the 42nd minute and Ki Smith in the 45th minute.

Despite going in at half time up 2-0 the Tevie boys had a bit of a rollocking as we looked to gain a bit more control to the game. Arnold as expected came out fighting for the second half and went close in the 48th minute as Mitchell saw his snap shot sail over the cross bar. A minute later Arnold were back in it as a flick over was smashed into the net by Joe Butler for 1-2. Arnold tails were up but credit to Teversal as they had more possession than the first half.

As Arnold tried to press for the equaliser Teversal had more possession and half chances fell to Greg Smith, Black and Ki Smith. With more confidence Teversal went further ahead in the 69th minute when Ki Smith skilfully found Radford who took the ball in his stride and smashed it home for 1-3 Teversal. A minute later a tiring Radford was replaced by Joe Fox.

Arnold nearly pulled a goal back in the 76th minute when Hewison pulled off another great save as he blocked a goal bound effort and the follow up was blasted over the bar. Tevie then lost the ball going forward in the 81st minute it was quickly played forward and despite chances to clear the ball broke to McLachlan who finished well to make the score 2-3. Teversal were however having chances themselves especially with the pace of Fox and should have gone further ahead when Black broke forward beat the keeper and looked to have an easy tap in but inexplicably passed the ball to Fox who was in front of him and offside with the management going mad!

Teversal replaced Mallinder with Geeson in the 85th minute to bolster the midfield and three minutes later put the game to bed when Fox broke at speed he found Black who returned the ball to Fox whose first attempt was saved but he followed up with an easy tap in to make the score 2-4.

Despite a backs to the wall first half Teversal were well worth the win in the second half and proved they can live with the fancied teams in the league.
Man of the Match: James Hewison - good first game of the season some great saves good composure and fantastic distribution.