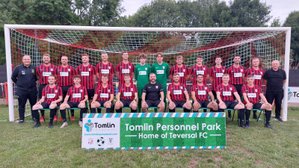 Teversal FC Res 5 – 4 Holbrook Sports Res
A nine goal bonanza saw Teversal claim their first win of the season.
Teversal first attack saw them hit the bar just seconds prior to the opening goal on ten minutes when Simon Groves headed home.
The lead was only held for four minutes when a free kick taken by Tom Jinks from about forty yards sailed over the keepers head and dropped into the goal just under the bar.
Teversal came close to regaining the lead on eighteen minutes when a free kick just outside the penalty area was well saved by the keeper for a corner.
Several good chances went begging before Simon Groves scored his second goal when a shot from distances went passed the diving keeper.
Again the lead was short lived as Holbrook’s Gavin McCready netted on forty minutes.
From the kick off Teversal won a penalty on forty one minutes when Bradley Cox was brought down and up stepped Simon Groves to score his hat-trick.
Half time: Teversal 3 , Holbrook Sports 2
The first half was very watchable and kept the very small crowd entertained and they were not disappointed with the efforts of the second half.
Holbrook should have equalised thirty seconds from the kick off when a free kick was not well at all.
On fifty five minutes Teversal had the ball in the net from a corner only to be cancelled out for an alleged push on the keeper. One minute later Holbrook made the score level when a cross come shot from Daniel Liddle from wide left 30 yards out just crept inside the far right post as the bad judgement of the keeper let it go past him, I assume he thought it was going wide for a goal kick.
Simon Groves found his shooting boots to night as he netted his fourth goal on seventy minutes when he came through the defence and passed the ball into the net. This started a semi riot as the linesman had his flag up for offside, which then got the management disputing the goal on the halfway touch line with the referee. From my position I think the referee was correct, the linesman I think flagged for another player being off side but was not directly involved in the play.
Teversal came close on eighty minutes when Josh Radford headed over the bar from a corner. Six minutes later from another corner Josh Radford did score from a close distances. Danny Hartshorn made a good save on eighty five minutes at his left post.
Still not disheartened Holbrook still pressed and on ninety minutes Jack Gaucher fired home from just inside the penalty area. The score now five four and the referee said five minutes of stoppage time. The news of the extra time inspired Holbrook and the next six minutes became what was best described as the battle of the Alamo. Wave after wave of attack on the Teversal goal, shot after shot with the Teversal players throwing their bodies in the way to prevent the ball going into the net, it was one of those situations you had to be there to appreciate what was taking place. Not sure how but Teversal hung on to win the game five four.
Teversal Team Sheet
1.Danny Hartshorn, 2. Tom Bates, 3. Jason Markell, 4. Craig Newton, 5. John Lee, 6. Jordon Schofield (14 46 min), 7. Daniel Barke, 8. Bradley Cox (12 83 min), 9. Josh Radford, 10. Simon Groves, 11. Daniel Wilson, 12. Tom Place, 14. Sean Butler, 15.Craig Nelson(Not Used)
Share via
FacebookTwitter
https://www.pitchero.com/clubs
Recent news