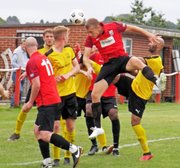 First win for the Reserves.

The Reserves welcomed Holbrook St Michael’s to the Tomlin Personnel Park for their third home game of the season. The previous two games ending in 1-1 draws.
The Ressies got out of the blocks quickly and after three minutes Lee Naughton striking the bar from inside the box.
The Ressies dominated the ball in the opening part off the game, however the longer the game went on the more Holbrook St Michaels were growing into the game and they began to enjoy more possession of their own. The game went into a half time stalemate of 0-0.
Both teams made one substitution at half time with Kyle Coleman coming on for the home side. The Ressies started the second half sharply with Ryan Hancock put through, Hancock beat the Holbrook keeper but couldn’t beat the post, hitting the outside off the post.
The Tevie Boys continued to push and press for the opener as the game began to approach the latter stages an over hit cross from the left saw Deacon Lee chasing out wide to recover the ball. Deacon Lee spun on the ball and chipped it to the far post as Kyle Coleman charged in and headed down with the ball bouncing from the ground into the roof of the net with 77 minutes gone. Giving the Ressies a 1-0 lead for the third game in a row.
Could the Ressies make it third time lucky and hold on to the lead?
Both teams made their final subs in last ten min of the game with sixteen year old Lewis Clift coming on to make his second senior appearance and John Higgingbotham making his league debut for the team.
The Ressies withheld the push from Holbrook St Michaels, stopping them from making any chances, and taking their first win of the season, and are still unbeaten. They have secured the best start to a season for many a year showing great progress and determination.
Full Time : Teversal FC Res 1 - 0 Holbrook St Michaels
Onto Tuesday, we travel away to Long Eaton in what will be another tough test for the team.
Share via
FacebookTwitter
https://www.pitchero.com/clubs
Recent news