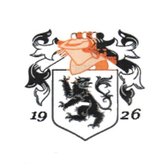 At least the early morning rain has stopped and the sun is out. It's not the warmest of days but the Reserves have another trip out, this time to the Welfare Ground in Blidworth.

Despite being in a bowl, the pitch is in good condition and we could have a good game on our hands this afternoon.
Once again Teversal Reserves are in their all blue kit, while Blidworth are in red (with black trim) shirts, red shorts and black socks.

3.00 : Teversal get the game underway at the Welfare Ground. They are attacking the end of the ground with the low bright autumn sun above the stand.
3.08 : Blidworth are awarded a penalty for a foul. Aidey Harris puts the ball on the spot and strokes it to the right of the Tevie keeper. 1-0 Blidworth.
3.13 : Gareth Mason sends a shot just wide of the post after some good work down the right by Liam Bush.
3.15 : Teversal fail to clear the ball from a Blidworth attack and the ball is slammed home by Matty Toseland from six yard to put the home side further ahead. 2-0 Blidworth.
Teversal have been under pressure at the back from the Blidworth front line, but are holding steady after a shaky start.
3.38 : Blidworth strike again. Some good passing as they work their way through the Tevie defence ends with Matty Toseland whacking the ball into the corner of the goal for his second of the game. 3-0 Blidworth.
3.42 : Tevie sub : 12 on for 9. Ellis King replace Brandon Hunt (shin injury - it's already a lovely bruise!).
3.44 : "Handbags!" A lot of pushing and shoving following a Tevie challenge. However no-one ends up being shown a card. The situation was well handled by the referee.
Half time at the Welfare Ground - Blidworth Welfare 3 - 0 Teversal FC Res.
4.00 : The teams are on their way back down the steps from the changing rooms to the pitch. The home side first followed by Teversal.
4.04 : Blidworth get the second half started.
4.14 : Another penalty to Blidworth following a foul by the keeper, who picks up a yellow for his troubles. Matty Toseland takes the kick and completes his hat trick sending the ball to the keeper's left. 4-0 Blidworth.
4.17 : It's five for the home side as the ball ends up in the net. Kai Wilson steals a spurious claim for it. 5-0 Blidworth.
4.18 : Tevie Sub : 14 on for 5. Kairo Wheatcroft replaces Aaron Rhodes.
4.26 : Craig Newton picks up a yellow card for a foul.
4.32 : Liam Bush gets a goal back for the Reserves. 5-1 Blidworth.
4.37 : Tevie Sub : 16 on for 2. Jason Robb replaces Kyle Coleman.
4.47 : Matty Toseland gets his fourth of the game latching onto a defence splitting ball, racing in on goal and slotting the ball wide of the Teversal keeper. 6-1 Blidworth.
4.51 : Liam Bush races through onto a loose ball and lifts it over the keeper's head and under the crossbar for the final action of the game. 6-2 Blidworth.
Full time at the Welfare Ground- Blidworth Welfare 6 - 2 Teversal FC Res.

Next week the Reserves are away yet again, they will have an home game soon! This time it's a trip to Wirksworth Ivanhoe, and with the clocks going back and a lack of floodlights at Wirksworth, the kick off time is earlier at 2.00pm.